In this HTC Wildfire review, I’m not only going to review the Wildfire itself, I’ll also show how it differs from the HTC Desire, the flagship Android phone that’s been flying off the shelves all year.

The reason is that HTC have released quite a few Android phones this year (with more due to be launched in the next few weeks), but given that they all have the HTC Sense user interface, you’d be forgiven for wondering which one to choose. Clearly they’re all for sale at a different price, so some have more features than others.

But which one is right for you? Which one represents the best value, and what features are you missing out on for the lower price?

So with that in mind, let’s start the HTC Wildfire review and see exactly how it compares with its bigger brother. 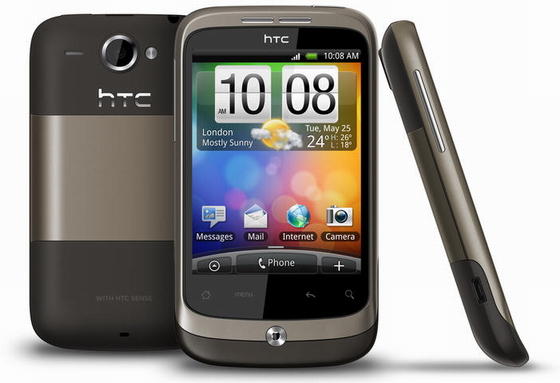 At first glance, the HTC Wildfire looks very similar to the Desire (and, indeed, to most of the other HTC Android smartphones). However, it’s a good deal cheaper, with the current lowest monthly deal just £9 a month – and that’s with the phone thrown in for free!

So something must be missing, but what?!

Well, the first clue comes from its size. It’s much smaller than the Desire, thanks largely to its 3.2″ screen (compared to the Desire’s 4″ screen). Worse, the screen only has a 240×320 pixel QVGA resolution, meaning it has fewer pixels, and so the display tends to look a little blocky.

Fortunately, it’s not all bad – it’s still a capacitive touchscreen, and although it’s not the best looking, it’s vey responsive, and is capable of displaying 16 million colours, too, so it’s still very colourful.

In other departments, the Wildfire is surprisingly well equipped for a mid-range smartphone. As well as Android 2.1 (i.e. the same version of Android that the Desire, Nexus One and Samsung Galaxy S shipped with), it comes with pretty much everything you’d expect from a much more expensive phone.

It looks good, its user interface (HTC’s legendary Sense UI, which you can read more about on our HTC Desire review) is extremely responsive, it has a 3.5mm headphone jack and pinch-touch zooming that you’d expect to find on an iPhone.

So, things are looking pretty good then!

Time, I think, to list some of the Wildfire’s benefits.

What you’ll love about the HTC Wildfire

I love Android phones, and I love HTC’s Sense UI as well, so you can probably guess I’m about to rave about the Wildfire! But I’ve every reason to, though, as you get a lot of phone for your money. Just check out what you get for your £15 a month: