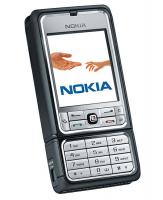 Hot on the heels of delaying the much-hyped, mobsharing potential of the wi-fi-enabled N91, Nokia have announced another mobile-music phone that’s actually very similar to its delayed sibling.  The Nokia 3250 isn’t an N-series phone, so isn’t meant to be as sexy, and it doesn’t have wi-fi enabled, so no mob-sharing potential – but it does twist! Again with the wow factor, this phone makes up for the lack of wi-fi with a seriously cool form factor, twisting to reveal a different set of keys. One set are what you’d expect in a mobile phone (numbers, etc.); the other are music-specific, enabling you to play your tunes, fast-forward, rewind, and generally hunt around for what you’re looking for without having to remember some arcane key combination or make out any extremely small blurry text that would normally indicate the music functions. 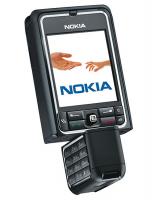 Actually, the twisting seems to be a bit of a gimmick, but it’s certainly one that works with me, shallow cool-feature-loving man that I am.  Initially the phone presents itself as a standard candy-bar design, with normal numeric keys at the bottom.  But wait – twist those buttons 180 degrees, and a new set appear, giving you non-standard, novel music-specific buttons. “Wow!” cry your mates! Yes, ok it’s definitely a gimmick, but be honest, what’s going to look better – a SonyEricsson W800i Walkman phone with a ‘Walkman’ sticker on it; a Motorola ROKR with an iTtunes sticker on it; or this, a Nokia 3250 with a bit that twists in a really cool way. Brands are cool, but twisty bits are so much cooler!
Other features include:
It’s expected to start shipping in the first quarter 2006 with an estimated retail price of 350 EUR before subsidies or taxes.