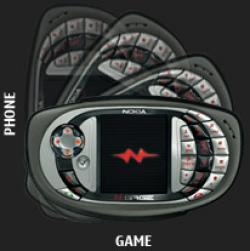 Nokia have announced their N-Gage mobile gaming phone will shortly cease to be.  They’ve decided the N-Gage was not the success they wanted, so have discontinued it, and aim to include the main gaming features of the N-Gage within their series 60 smartphones.

In one respect, this is a shame – the N-Gage was a bold move by Nokia, and showed at least that the company are prepared to gamble.  However, although a mobile gaming device seemed like a good idea (and certainly sales of the Nintendo GameBoy and PSP prove that there is a market for games on the go), the flaws of the N-Gage are only too apparent, and have been endlessly pointed out.  Is it a mobile phone, is it a games machine? If the latter, then why am I putting such a hugfe thing next to my ear and speaking into it?! If the former, why’s it so damn big and clunky? And, in the words of Slashdot commenter Y-Crate:

“ The screen’s aspect ratio was 180 degrees off, the device had to be disassembled to change games, it tried to be the Swiss Army Knife of phones and failed miserably at it…the brutally awful sidetalking “feature” along with the painfully awkward keypad made it something that not even the overpowering hype could render a somewhat decent product in the minds of potential customers.”

The good news, though,  is that Nokia will be focusing on mobile music phones for the rest of 2005; on mobile TV for 2006; and then back to mobile gaming once again in 2007, when “screen sizes and quality will be much more conducive to mobile gaming systems”,  according to Antti Vasara, Nokia’s vice president for corporate strategy.  So don’t give up hope of mobile gaming taking off successfully – just hope Nokia employ some people who known about gaming before they try again!