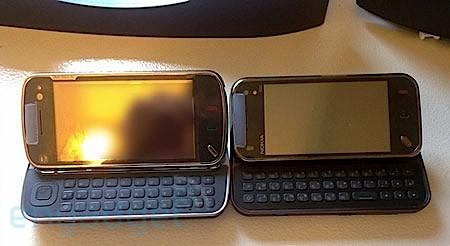 No sooner has Nokia launched the Nokia N97 than rumours of a new Nokia N97 Mini start swirling around the blogosphere.

This would be important news in its own right, but given the underwhelming reception that the Nokia N97 received, it’s news that might just save Nokia’s skin.

More details and pictures of the Nokia N97 Mini after the jump. 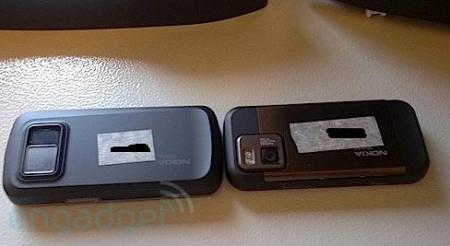 Launched amidst a blitz of maretking and touted as Nokia’s first touchscreen high-end smartphone, the Nokia N97 was pitched squarely against the iPhone, Android and the dozen other touchscreen smartphones that were racing ahead of Nokia in the smartphone wars.

Unfortunately, the N97 was flawed in two areas:

If the experience was better or the price much lower, it would have been great. But as a high-end smartphone with a high-end price tag to match, it just didn’t cut it in the face of overwhelming competition.

The Nokia N97 Mini is a smaller version of the N97 with a smaller phone – and, er, that’s about it! In every other respect, it’s identical to the N97.

Although the N97 Mini has not been officially confirmed by Nokia, a moderator on the Vodafone Ireland forum inadvertently announced its existence in response to a user’s query:

And now we have these nifty new photos offering us further proof of the N97 Mini’s existence.

The key thing to note in the Vodafone moderator’s statement was the N97’s “competitive pricing” – in other words, it addresses one of the key flaws of the existing N97: cost.

At £430 for the unlocked version, the current N97 is not exactly cheap. Worse, a two year contract will set you back £40 a month, making it more expensive than most Android phones, and on a par with the iPhone. Given that its nowhere near as good as these phones, it’s not exactly a compelling offer!

Fortunately, the Nokia N97 Mini makes things much more attractive. By being much cheaper, it no longer competes directly against these phones. By offering much the same features as the N97 (apart from a lesser camera), it brings touchscreen smartphones to a much wider market; people who wouldn’t normally be able to afford the likes of the iPhone, for example.

So at a stroke, the N97 Mini repositions Nokia’s smartphone to a more welcoming market, widens its potential customer base, and removes the sting of criticism that the N97 received, as the Mini won’t be competing with the established high-end toucshcreen smartphones.

In other words, it’s win-win for everyone…

…except the N97 itself! The only phone that will be hurt by the N97 Mini is the N97, as it’s difficult to see why anyone would buy such an expensive phone when a nearly identical model exists for a much cheaper price.

In one sense, then, Nokia could be seen to be cannibalising sales of its own products. In reality, though, it’s made a very shrewd decision to cut its losses as soon as possible, turn the N97’s business case on a dime, and reposition itself to where the market is truly at.

Before long, Nokia will release a smartphone that can truly compete with the iPhone, Android and Pre. The N97 is not that phone. The N97 Mini, though, helps the company save face in the meantime and keeps its fans hungry for when its real iPhone competitor is finally released.