Nokia’s CTO, Rich Green, has announced that the much anticipated Symbian^4 mobile OS won’t be released on a new phone – at least not in the way we were all expecting.

Last year, Nokia announced that Symbian^3 would be a stop-gap improvement over the existing Symbian OS that powered its phones, with Symbian^4 coming out hot on its heels in 2011, and being the real game changer (i.e. Nokia’s mythical iPhone killer that’s still to emerge).

All that’s changed now, though, as Nokia has adopted the Android model – namely, keep on releasing new updates as they’re created, rather than in one brand new OS. This means that the key features of Symbian^4 will be automatically included in Symbian^3 as they’re developed, and that phones that currently use Symbian^3 will automatically update themselves to take advantage of those new features.

So phones such as the Nokia N8 will slowly morph into Symbian^4 phones as the features of Symbian^4 are gradually rolled out. 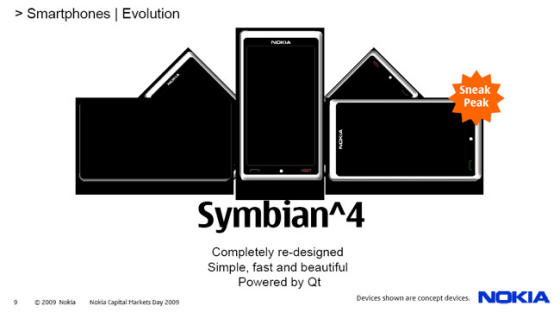 This is actually great news, as not only does it mean that Nokia phones from the N8 onwards will continue to improve, it also means that there won’t be an embarrassing division between Symbian^3 and Symbian^4 phones.

Nokia also revealed that the Qt development platform will be available for Symbian^3/4 and Meego, meaning you can write an app for Qt and it will automatically run on Symbian^3, Symbian^4 and MeeGo devices.

Speaking of MeeGo, apparently the first device won’t be available until 2011, which is no surprise to us, but which must be to Nokia, who’d promised us a Nokia MeeGo phone before Christmas.

Finally, Nokia’s browser is getting an overhaul and will soon support HTML5, which will be the platform for user interface development for apps in the near future.

These are smart moves by Nokia, but it remains to be seen if the company can do enough to win over the critics and take back some of the market share it’s recently lost (from 34% to 30% in one year).