The Samsung Continuum was officially launched yestrerday at a Samsung press event that had been widely leaked weeks before. In fact, so much was leaked (including the Continuum’s user manual!) that there was absolutely no surprises at the press event at all, making it a little disappointing.

What isn’t disappointing, though, is the Continuum itself, which, as its name might suggest, is a continuum of the Galaxy S line of phones, which is no bad thing given the plaudits the Galaxy S has been receiving.

One thing we can take away from the press event is a set of videos of the Continuum in action, which we’ve compiled for you below. 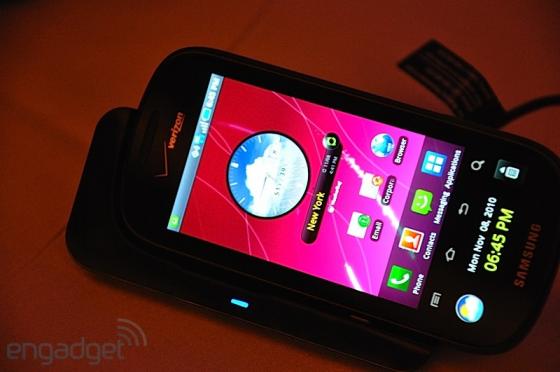 The Samsung Continuum is basically the same as the Galaxy S, but with a novel new screen. Samsung have actually been calling it a dual screen phone, with a normal 3.7″ screen on the top, and a much smaller screen on the bottom that acts as a “ticker”, showing you tweets, text, emails and the like without having to switch the main phone on.

The reality is slightly different – the phone actually has a single 4″ screen the same as the Galaxy S, but Samsung have cleverly split it into three separate virtual parts: the main screen itself, the four icons (home, abckback, search, etc.) and the ticker screen.

These three areas of the screen are physically all part of the same single 4″ screen, but software underneath separates them into their virtual different areas, making it look as though there are two distinct screens, with the four main buttons separating them. 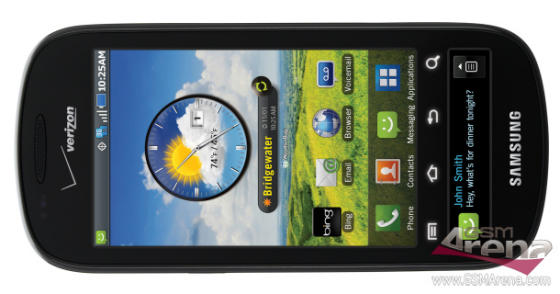 Apparently Samsung have been calling it “dual screen” because that’s how it behaves, but the reality is too difficult to get across int he marketing literature (which, given how long it’s jsut taken me to describe, I reckon is pretty spot on!)

The rest of the phone is identical to the Galaxy S – the same 1GHz Hummingbird Processor, 720p video playback, 5 megapixel camera, GPS, etc. One thing that the Continuum does do better than the Galaxy S is take pictures at night – Samsung thoughtfully provided a single LED flash, whereas the Galaxy S has none.

OK, time for the Samsung Continuum videos. I particularly like the first one, where th eman demoing the Continuum ends every sentence with “mmmkay!” I thought this only happened to School Teachers!

When I first heard about the ticker screen, I was a little skeptical. It seemed a bit gimmicky, it reduced the overall screen size, and I couldn’t really see the point. But having seen the Contiuum’s ticker screen in action in these videos, maybe I was a bit hasty.

The ticker screen gives the Continuum a new functionality that’s not easily replicated in other phones. It makes the information you need very easily accessible at all times, regardless of what you’re doing on the phone. Of course, whether this is a good thing or not remains to be seen – this constant level of multitasking might just end up frying your brain!

Currently the Continuum is only sale for Verizon customers in the US, but it should go global soon.