HTC have been the phone manufacturer to beat throughout 2010, with a plethora of new Android and Windows Phone 7 devices that have been all but impossible to beat. But with the new Google Nexus S made by Samsung, and with the Korean company having a blisteringly fast dual-core Android phone waiting to be released, the pendulum may have swung in Samsung’s favour.

Not for long though. In an interview yesterday, Peter Chou, HTC’s CEO, revealed a few of the things we can expect for 2011. 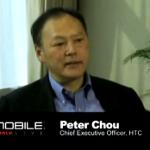 First up is support for 4G LTE networks, promising blisteringly fast broadband speeds on your mobile in the second quarter of 2011. On top of that will be embedded NFC chips for contactless payments. This should be an increasingly popular technology as it’s a big part of Google Gingerbread (Android 2.3) and rumours have it that the iPhone 5 will support it, too.

Android and Windows Phone 7 will both remain the focus of HTC throughout 2011, and there will be a range of devices that will include standard touchscreen phones as well a full QWERTYs.

So nothing too revealing, but an intriguing glimpse nonetheless.