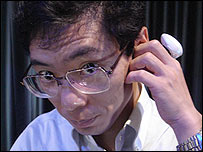 Hot on the heels of our recent report of Nokia’s somewhat potty prototype mobile phones, comes news of Japanese mobile operator DoCoMo’s latest concept – the finger-ring. Known even more amusingly as the ‘Ubi-Wa’ in Japanese, the device is a ring that actually turns the finger wearing it into a reciever.  In other words, to listen to a call, you simply place your finger in your ear! And no, it’s not even April!
At first glance, this seems bonkers, and on second glance, somehow rude, but overlook the innuendo, ignore, even, the strange semi-StarWars reference that seems to be buried in the name, and the concept isn’t as daft as it first appears. Jump the link to see why this could be the coolest prototype phone gadget of the year.
The Ubi-Wa has been designed specifically for noisy places, where you can’t hear who you’re calling. For it work, you simply place the Ubi-Wa bearing finger in your ear! This isn’t so daft, though, as you do this anyway with your other ear in noisy places, just to drown out the background noise.  With the Ubi-Wa, you still stick a finger in your ear, but instead of drowning out sound, the ring converts speech sounds from a mobile phone into vibrations. These travel down the bone and into the ear canal, which cunningly turns them back into intelligible speech. Amazing!
Better still, it’ll soon be able to let you dial someone simply by tapping your finger on the desk (the number of taps, or the rhythym you choose to use, determines which person is called). We like this – we like this a lot. With a Ubi-Wa:
According to reports from the BBC, this device actually works.  Whether it’ll see the light of day is another matter, but unlike much of Nokia’s recent bizarre creations, this one seems genuinely useful. Come on, DoCoMo, release the thing (and not just in Japan, either!)

So, any disadvantages? Well, as the picture shows, the device, although called a ‘ring’, is more like a ‘giant slug’, and it seems as though you’re wearing a Bluetooth headset on your finger rather than on your ear. Don’t worry, though, as this is just a prototype, and the thing will soon shrink to the size of a standard ring (and let’s be honest, even if it was simply a dressed-up Bluetooth headset, it would still look better on your finger than on your ear!)