More news of the forthcoming Nokia N9, which we saw blurry leaked of last week. No we can see the phone in much more detail thanks to this video preview from Negri Electronics (the same people who took th eblurry pics of the N9).

As you can see from the video, the form factor of the N9 is like a cross between the N8 and the N900. It’s got a deliciously large screen that supports multi-touch, and what looks to be an excellent slide-out QWERTY keyboard.

The Nokia N9 will also come equipped with an 8 megapixel camera and HDMI out, which should mean it’s got a full multimedia feature set.

Its multitouch screen supports pinch and zoom for the mobile browser, but it must be stressed that the OS you see in the vidoe isn’t actually the oen that will be shipped in the final product. This is where things get a little odd! 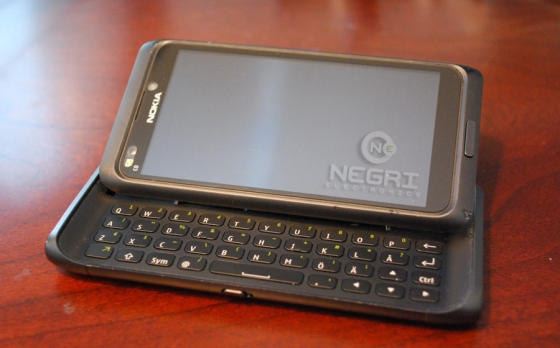 The prototype on display in the video feature Symbian^3 – the same mobile OS that the new Nokia N8 has. In contrast, the Nokia N9 will actually feature Nokia’s new Meego, which is a brand new OS that’s actually a combination of Nokia’s Maemo OS (the one in the N900) and Intel’s Moblin.

Still with me?! Just think of it like this: the way the N9 will look and feel when on sale will be totally different!!

Fortunately all the hardware will remain the same as you see in the video here.

I have to say it’s looking really good. Both the Nokia N8 and N9 are the first Nokias I’ve been looking forward to seeing in quite a while.