After upstaging Nokia yesterday and launching two new Android phones with improved user interfaces, HTC are in the news again with a leaked video of their gorgeous HTC Sense user interface running on an unknown Windows Phone 7 device.

Hold on, you say, wasn’t Windows Phone 7 meant to be uniform across all devices, with no room for user interface customizations? Well, either Microsoft have relaxed their grip a bit, or someone forgot to tell HTC!

The result is quite simple the best looking user interface I’ve ever seen! In fact, it’s so good, it makes desktop user interfaces look dated.

Check out these two leaked videos to see what I mean. 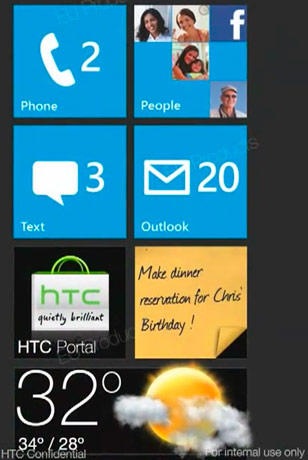 I hope you agree, the result is stunning.

I hated Windows Mobile. I was very skeptical of Windows Phone 7, particularly when Microsoft said they weren’t going to allow any customization. However, although I don’t like the plain look of the homescreens, I have to say that the overall look and feel of Windows Phone 7, particularly with its animations and transitions, is extremely impressive.

And now, what HTC has shown, is that there is room for customization after all – with what’s being called the HTC Hub.

Hubs, in case you’re not sure, are homescreens that focus on a specific theme. So there’s a Gaming Hub, for example, and an Office Hub. What we didn’t know was that indiviual manufacturers would be able to create their own Hubs, which would differentiate their Windows Phone 7 device from another manufacturer’s.

If not Nokia weren’t already worried enough by HTC’s latest Android phones, the Desire HD and Desire Z, they’ve now got HTC’s Windows Phone 7 devices to worry about as well!