While at Nokia World 2010, I was able to spend time with the new Nokia E7 – so much time, in fact, that I can now write a full hands-on Nokia E7 review!

And I have to say I liked what I saw. Despite me being harsh on Nokia’s phones for a while now, I thought the E7 not only made a lot of sense for the market it’s aimed at (i.e. power-users and business), it’s actually an all-round cracking good phone in its own right.

But what makes it so good? Why is the E7 so perfectly suited for the power-user, and why should you consider it?

Read on and all wil be revealed!

The Nokia E7 is a smartphone with slide-out QWERTY keyboard, full touchscreen, the new Symbian^3 operating system, and a feature list so extensive, you’ll find it hard to believe what Nokia have managed to cram into its small(ish!) dimensions.

As you can see, its QWERTY keyboard runs the full length of the phone and snaps out in a similar way to the ill-fated Nokia N97 of last year. The E7’s keyboard is much better, though, and the phone looks much cooler than its predecessor, too, as it’s based on Nokia’s new smartphone design, prominently shown on the Nokia N8. 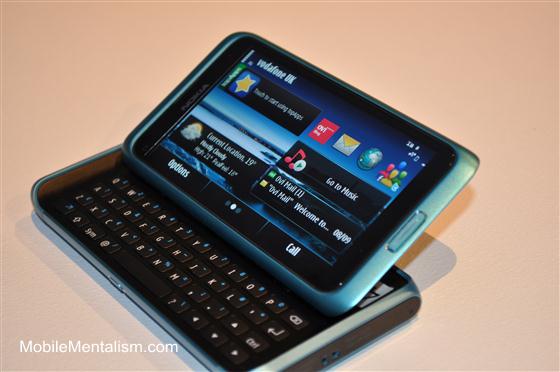 Better still, the E7 comes with some ridiculously powerful multimedia hardware, including an 8 megapixel camera and HDMI-out port!

And this is where things get really interesting, as the E7 is by no means just for business users.

Welcome to the new Nokia Communicator!

It turns out that the Nokia E7 is, in fact, the latest in a long line of Nokia Communicators. I had the last Communicator that Nokia made. Called the E90, it was the most sophisticated smartphone of its time, and with its huge screen, Webkit-based Web browser, GPS and full QWERTY keyboard, it really could do everything you’d now expect a smartphone to do.

The fact that it did this three years ago shows how far ahead of its time it was.

But the E90 was slow and absolutely huge! I mean so huge it wouldn’t actually fit into your pocket, and it weighed more than a netbook!

But the E90, of course, is not the E7’s competition. The world has exploded with smartphones since 2007, so let’s check out the E7’s main features and see what it offers you compared with the competition.

What you’ll love about the Nokia E7

Here’s a brief rundown of some of the main benefits of the Nokia E7:

OK, that’s a lot of benefits! Better still, though, rather than this just being a shopping list of crazy features that don’t work all that well, they all work superbly. The keyboard is the best keyboard of any mobile phone on the market. Beautifully engineered, you’ll have no problem typing on it, no matter how fat your fingers are.

The camera takes superb pictures, making the E7 a terrific camera phone. Its video quality is unrivalled – see the videos I shot at Nokia World (below) to see just what this smartphone can do.

Indeed, it’s the E7’s multimedia features that really set it apart. It’s aimed at the business market, as you can tell from its office-based apps and connectivity options – but how many business phones do you know that can playback 720p HD video on a home theatre with Dolby Surround Sound?!

This mix of utterly reliable professionalism with superb hardware features all come together to make the E7 one of the best phones for the power user, and one seriously worthy of consideration if you create or edit documents or are a heavy media producer and consumer.

Now with all that said, you’d think I’d be rushing out to buy an E7 myself. I love QWERTY phones, I’ve had an E90 before that I loved, and I’m a big fan of Nokia.

Sadly, though, I won’t be. The reason? Symbian^3, the operating system that chugs away on the E7 like a carbuncled old wart – always there, slightly irritating, and not exactly the prettiest looking of things!

As you may guess, I’m not a fan of Symbian^3. Symbian itself was class-leading 3 years ago. Then came the iPhone, then Android, then sexy user interfaces like HTC’s Sense, and now Windows Phone 7. All of them are better than Symbian!

This leaves the E7 as a phone with absolutely fantastic hardware specs, that really will be a phone you could love and that would do everythng you wanted it to, but will ultimately leave you feeling like you’ve 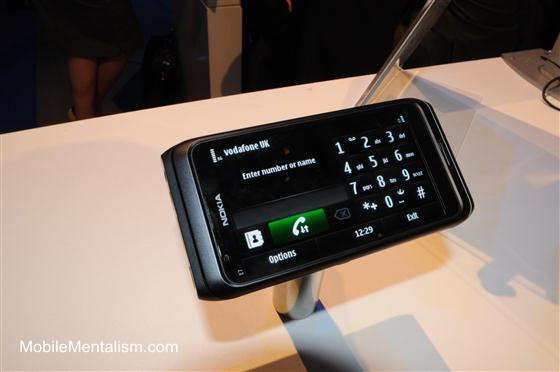 settled for second best, knowing that all of your mates will have a sexier phone than you do.

If you’re a Nokia fan, though, or if you don’t care about flashy interfaces, then don’t listen to a word I’ve just said – you’ll adore the E7!

Videos of the Nokia E7 in action

It’s at this stage that I’m sure you’ll want to see the Nokia E7 in action to see what I’m on about! Well here you go.

Conclusion – should you buy the Nokia E7?

Now this is a tricky one. Taken on its own, the Nokia E7 is the best phone Nokia have ever made, their best smartphone by miles, and a phone with every gadget you could ever wish for, each of which does the job superbly.

However, you can’t take it on its own, as the dear old Nokia has to compete with the likes of the Desire Z, the latest Android-based QWERTY phone, and all manner of other non-QWERTY smartphones, each of which is just as capable as the E7, but with a better user intreface!

But focusing just on QWERTY phones, and ignoring the likes of the iPhone, the Desire HD and the Samsung Galaxy S, the E7 has to compete with the HTC Desire Z, the Sony Ericsson Vivaz Pro and a few Motorola QWERTY phones such as the Milestone and backflip. The question is, does it?

As for the Desire Z, well that’s much more difficult to answer. The Desire Z’s hardware features are almost as good, but its user interface is much, much better than the E7’s. If you’re a Nokia fan, though, or don’t care about the user interface but just want the best hardware you can get, then go buy the Nokia E7 – yoo won’t regret it! But if you want a phone with a camera and video that’s still good, but not quite as good, but which has a much better user interface, then go for the HTC Desire Z instead.