One of the least best kept secrets of the year is the new LG Optimus Star, LG’s first attempt at doing an Android phone properly. And by properly I don’t just mean adding a shiny new user interface to the stock Android platform – I mean creating the first Android phone with a dual-core processor (NVIDIA’s Tegra2) for blisteringly hot performance and full HD 1080p video playback.

But what does all that power look like in real life? Have a look at the following videos and see for yourself! 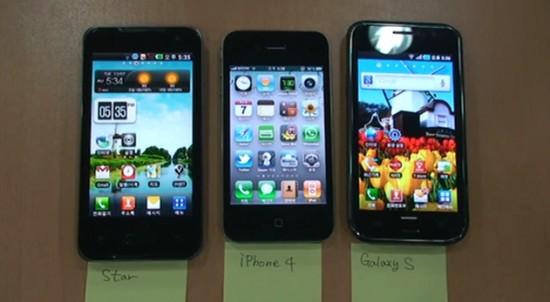 The LG optimus Star will be known as the Optimus 2X in Korea, where it’s due to be launched in a few months’ time, and one intrepid blogger over at Phandroid dug uip a few YouTube videos showing off the power of LG’s dual-cored beast in all its glory.

The first video (below) benchmarks the LG Star against an iPhone 4 and a Samsung Galaxy S:

The next video shows the LG Optimus Star displaying a 1080p video on an HDTV, which is plugged into the Optimus Star via its built-in HDMI cable. As you can see from the video, the result is astonishing, given that it’s being driven from what is, after all, a mobile phone!

This next video is simply stunning, as it shows the LG Star powering a 3D game on an HDTV. Granted there’s not much going on at once, but it’s clear we’re talking at least PlayStation2 quality graphics here, and all from a mobile phone. That’s the power of the Tegra 2 chip beating inside this beast!

The final video gives a powerful indicator of just how powerful the Tegra 2 chip is, as it shows the Optimus Star and a Samsung Galaxy S performing the same graphics benchmark test at the same time – and the Optimus Star kills the Galaxy!

2010 has undoubtedly been the year of Qualcomm’s Snapdragon range of processors, which have powered everything from HTC Desires, Motorola Droids, Sony Ericsson Xperias and Dell Streaks. In fact, just about the only processors they haven’t powered this year has been the iPhone 4 and the Samsung Galaxy S (which uses Samsung’s own Hummingbird processor).

But next year? Qualcomm are going to have to fight hard to retain their crown. NVIDIA’s Tegra 2 chip is already offering blistering performance, and it’s also the chip of choice for Motorola’s new tablet, and also potentially some new Blackberry hardware. Samsung, too, have a dual-core chip waiting in the wings in the form of the Samsung Orion.

Fortunately for Qualcomm, they have their own dual-core version of the Snapdragon coming soon as well, which means that 2011 will be the year of the dual-core smartphone. And if the LG Optimus Star is anything to go by, that’s means some very very fast smartphones are about to be unleashed on us all!

What a great start to the new year!