Steve Jobs has officially launched the new iPad2 at an Apple press conference today. The iPad2 takes the fight to its new Honeycomb-based competitors with a much stronger set of hardware. Featuring a dual-core A5 CPU, the iPad2 is twice as fast as the original iPad, has 9x faster graphics processing power, and yet has the same 10 hour battery life as the original.

The new iPad2 also features dual front- and rear-faciong cameras, and comes with the same gyroscope as the iPhone4.

Let’s see what else it has to offer. 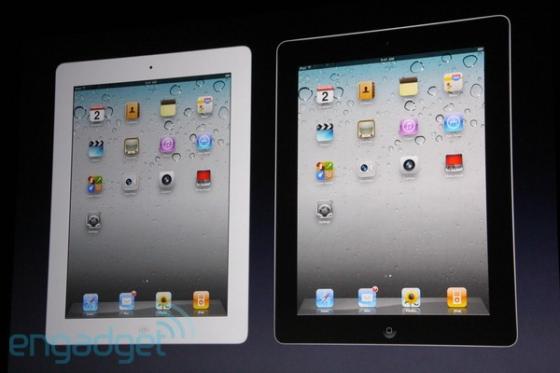 The new iPad2’s features look like they’re certainly a match for the latest Android HoneyComb tablets, such as the Motorola Xoom. With its 1GHz dual core Apple A5 processor, enhanced graphics processing abilities, and dual cameras, it’s certainly got everything that the Xoom and its ilk have got.

I just can’t help feeling there should have been something a bit more – something to take the iPad2 far beyond its competitors, not just take it to the same level. 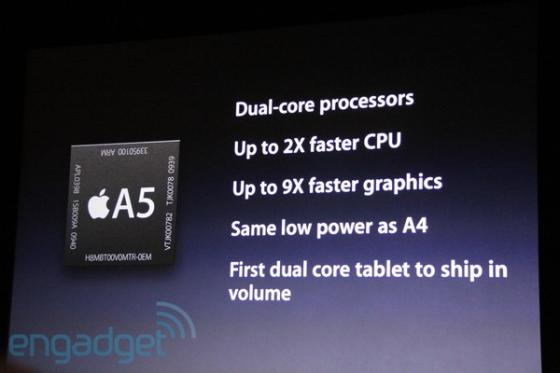 Here are its major new features in more detail – see what you think of them, and compare them to the Motorola Xoom or Samsung Galaxy Tab 10.1.

the iPad2 has two cameras – a front-facing one and a rear-facing one. Unbelievably though, neither has a flash! Presumably this is so the 10 hour battery life can be maintained. They’re not as good as those from the Tegra2-powered Android tablets either, with the main rear camera only capable of 720p HD video recording, compared to the Tegra2-powered Android tablets supporting 1080p full HD.

Intriguingly, Apple hasn’t mentioned how many megapixels the rear camera has.

The iPad2 comes equipped with an HDMI port and HDMI mirrored video output, which means that what you see on the tablet’s screen is mirrored exactly onto your HDTV. Not just any video or photos – the whole user interface. In effect, the TV becomes the screen.

Unfortunately, this doesn’t come cheap. You’ll need a special Apple HDMI cable, which will cost you $39.

One thing Steve Jobs was particularly excited about was a new cover for the iPad2 that Apple’s calling the Smart Cover. This is a special cover that sits over the front of the screen, kept in place (and auto-aligned) by magnets. The case contains micro-fibre, so it automatically cleans the screen, and it has one rather special trick: it folds up into a traingular, toblerone-esque stand that you can use either to lean the iPad2 against when typing on it, or to stand it up when using the iPad2 as a digital photo frame. 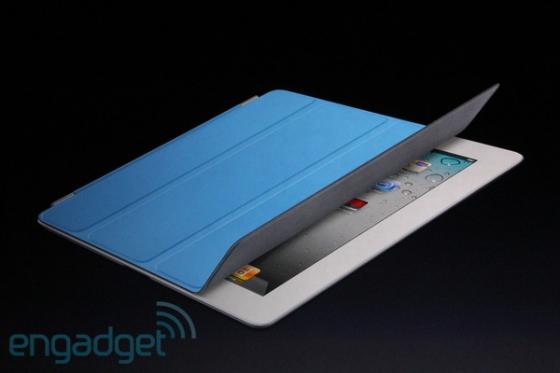 Oh, and of course the cases cost money as well – that’ll be another $39, thansk very much! 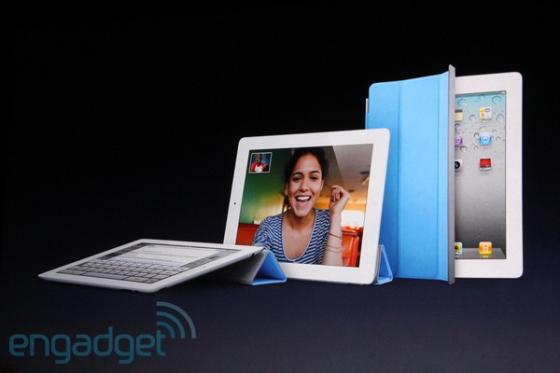 The new iPad2 will use a new version of iOS, this time ramped up to iOS 4.3. It integrates much more tightly with Apple TV, enabling you to see your pics on your TV.

There’s also a personal hotspot feature, but only for the iPhone4 – for some reason, the iPad2 won’t support this.

The iPad2 also comes with a variety of new apps. First up is the PhotoBooth app, which naturally takes advantage of the tablet’s two new cameras. You can use the app to add real time effects to your photos, adjustable by swiping your fingers over the photo on the iPad2’s screen.

There’s also FaceTime on the iPad2, and you can FaceTime between iPads and iPhones. Big whup!

iPad2 also gets iMovie, which, as you can imagine, lets you edit movies! It lets you do multitrack audio recording, share you videos in HD, and…well, you can read it all on the slide below! 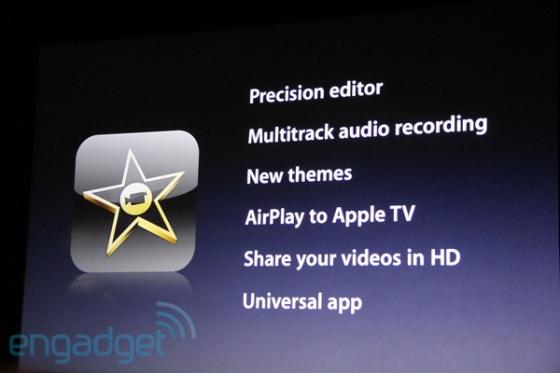 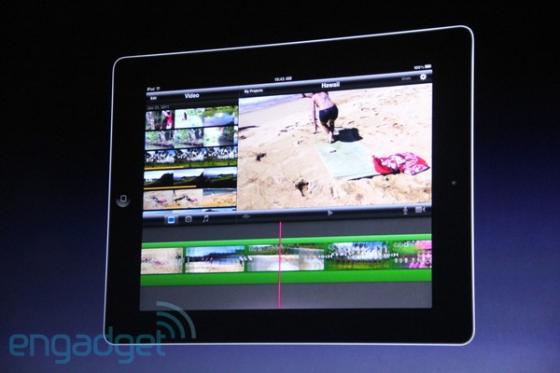 Next up is Garage Band, a new app with touch instruments, effects, 8 track recording and 250+ Loops.

It looks good. I particularly like its touch interface, and the novel things you can do with it thanks to using your finger as the primary input method rather than the mouse. But Garage Band also exists on the Mac and has done for sometime. This is not new. This is not iPad2-specifi.

I was hoping for something more! 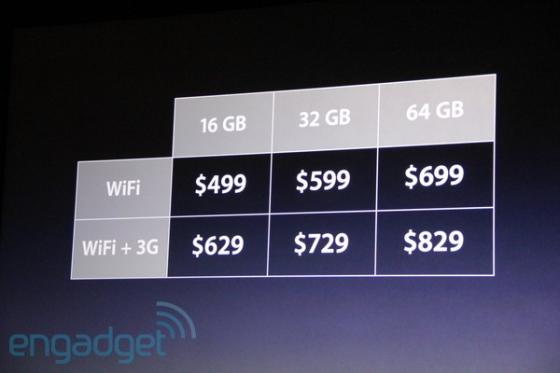 The iPad2 will be out on Verizon and AT&T for the same $499 price as the original iPad. naturally, that;s for the Wi-Fi only, tiny-storage version. To get the proper tablet experience, you’ll need to fork out $829. Which is a bit steep, given that all you get is an extra 48GB of storage and a 3G modem”

The iPad2 release date is set for march 11th in the US, and March 25th across the rest of the world! Say what you like about Apple, but they know how to roll their products out super-efficiently! It helps, of course, that they have their own network of Apple Stores across the worls.

Is the iPad2 as magical as the original iPad?

Steve Jobs introduced the original iPad as being a “magical” device. I think that’s a bit strong, personally, but it was certainly a huge event in the world of laptops and desktop PCs, and was another body blow to the sinking ship of the desktop. It sold 15 million units, which is a testament to its success as a new device.

It also commanded over 90% of the market, principally because it was the market!

But now, with Android Honeycomb and HP’s new webOS-based tablets, the iPad has real competition. The question is – has the iPad2 done enough for Apple to stave off the competition and retain it’s hugely impressive market share?

In terms of market share. the answer, of course, is no. There’s no way the iPad2 can retain a 90% market share when it has this much new competition stacked against it. But can it sell another 15 million units? Quite probably. The tablet market is exploding, so even though the iPad2 won’t maintain the same level of domainance as the original iPad, it can still easily ride this new wave of computing, selling massive numbers all over again.

But in terms of innovation, the iPad2 is also left wanting. It’s just an iPad with similar specs to the Xoom – not quite what the fanboys had in mind!

Fortunately, there is light at the end of the tunnel. Odd rumours persist that Apple is working on the iPad3 in time for the end of 2011, and the iPad3 really will be good enough to upgrade to. Because let’s face it, if you’ve got an iPad, you’ve no need to upgrade to the iPad2 unless you need the cameras.

But in the meantime, if you’ve got an iPad, don’t bother upgrading to the iPad2. And if you haven’t, and you want a tablet – well, with the Xoom, Galaxy Tab 10.1, HP’s new webOS tablets, Blackberry’s Playbook and now the iPad2, you’ve got a fantastic choice to make!

Who’d have thought the tablet market would have grown this big this quickly!