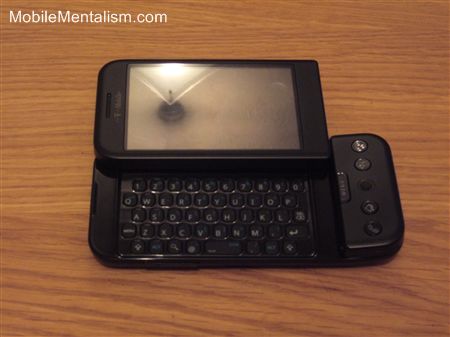 Here it is at last – my hands-on T-Mobile G1 review! I’ve had a Nokia E90 smartphone for the past 18 months, but was forced to replace it when it started to go slightly haywire! So after much thinking, I decided to go for the T-Mobile G1, the first Google Android phone on the market. And I’m so glad I did! To say it’s completely changed the way I use my mobile phone, the Web, and even the time in my day is an understatement!

Just like the iPhone, the G1 is a disruptive technology that’ll further transform the mobile phone market.

Read the full T-Mobile G1 review after the jump to see why. 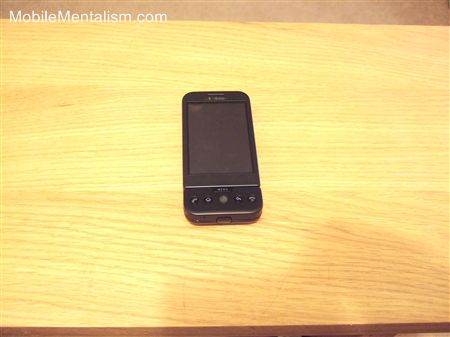 The first impression that you get from the G1 is that it’s one ugly looking phone!Although it’s a true touchscreen phone, the phone doesn’t cover the entire surface like the iPhone – there’s an odd looking “chin” at the bottom housing five buttons and a rollerball. The chin is slightly curved in order to make talking on the phone easier. As a big blob of phone real estate, it serves two purposes – it houses many of the phone’s inner circuitry, and it makes it annoyingly uncomfortable to use!

Actually, it’s not that bad. The slide-out QWERTY keyboard is extremely usable, and although the big chin does make typing long emails or text tiring after a while, you’re unlikely ever to need to type such long drafts anyway. Good thought the G1 is, it’s still only a smartphone, and not designed to write your next novel on!

On the back of the G1 is the obligatory camera. It’s not great, but at 3.2 megapixels it’s reasonable enough. Annoyingly, there’s no flash, but you do at least get autofocus.

One other feature of interest is the little roller-ball. Positioned on the chin, it acts as a mouse pointer, smoothly scrolling between actionable elements on the screen, such as icons, hyperlinks or text insertion points. Although you may not think this is necessary given that the G1 has a touchscreen, it’s an extremely useful addition when using the G1 in anger. 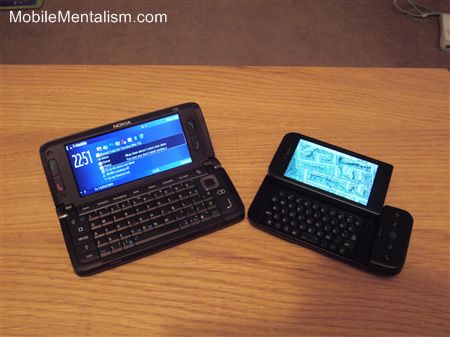 The T-Mobile G1 is all about the user experience. Before I get to that, though, a few words on features.

The G1 has an uncanny ability to know exactly where it is in the world. With aGPS, an accelerometer and a compass all built-in, it knows its location, which way it’s pointing and which way up it is. Combined with the openness of the G1’s design, which means that all of these features are easily accessible by third party applications, this gives rise to some seriously impressive applications.

The G1, as you’d expect, is fully loaded as far as connectivity is concerned. Wi-Fi, Bluetooth 2.0, USB 2.0, quad-band GSM, EDGE, GPRS and 7.2Mbps HSDPA are all supported. Better yet, the G1 is always-on, meaning you get instant notifications not just from email and SMS, but from Twitter, Facebook – even when an earthquake hits anywhere in the world!

The processor is a Qualcomm® MSM7201A running at 528 MHz, which is nice and fast – there are certainly no lags when browsing or using Google Maps, which was what used to happen on the E90. The whole phone is extremely responsive, which helps make the overall user experience simply glorious! 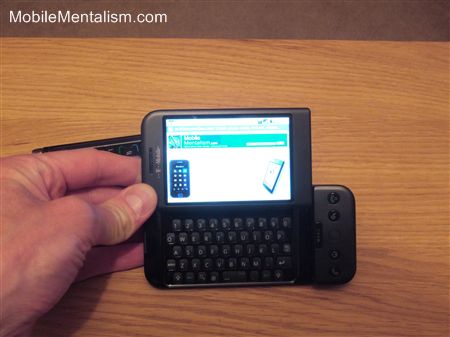 Fancy interfaces are all very well, but the acid test really is how good is the overall performance? Is the interface intuitive? Is the phone itself responsive to the user’s commands? And can all the features of the phone be accessed easily, or do you have to hunt through countless menus to find what you’re looking for?

As far as the G1 is concerned, it’s user experience is fantastic. In terms of interface design, it seems a bit weird at first. There’s the touchscreen, a separate Menu and Back button, a trackball that emulates a mouse and the QWERTY keyboard – in other words, four separate interface devices in one unit! This can take a little time to get used to, but I stress the term little. Because the entire operating system is built around these four input devices, it takes no time at all to get used to them being there.

Once you do get used to them, everything on the G1 becomes obvious. Each input device comes into own according to the feature that best makes use of it. Take Web browsing, for example. The Web browser is based on the same WebKit browser used on the E90 and that also forms the base of Google’s Chrome and Apple’s Safari’s browser. On the G1, it’s extremely quick and much more responsive than on the E90.

When you need to scroll down a page, the touchscreen comes into its own. You can either zoom into or out of the page using a virtual + and – key that appears on the screen, or slide the Web page around the screen simply by dragging it – exactly like you can with the iPhone. 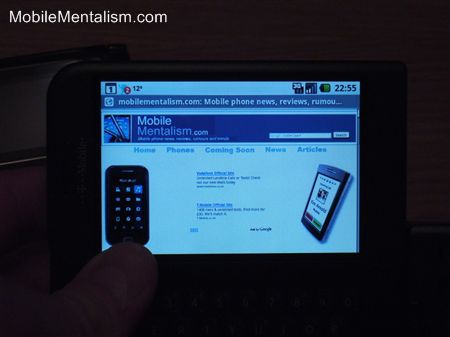 Sometimes, though, you’ll get several links that are so close together, you can’t actually select one accurately enough with your stubby finger. In this case, you can either use the rollerball to select the appropriate link, or just zoom into the screen to make the link bigger. Both ways work just as easily, and you’ll soon find yourself doing this intuitively.

The applications are all contained within a single screen that you slide up from a tab at the bottom of the desktop, which itself is accessible at any time by pushing the dedicated Home key. Because the G1 is multi-threaded, you can have many different applications running at the same time, and even download other applications in the background.

Notifications are just as easily accessed by pulling a virtual tab from the top of the screen. Notifications can come from any of the pre-installed Google apps (GMail, Google Maps and Google Calendar), from text messages, or from any 3rd party app such as Twitter or Facebook.

It’s this that helps make the G1 a game changer. Rather than hearing your phone beep only when a text is received, it’ll now beep when any of dozens of different services choose to notify you (obviously you can choose which applications notify you and set the notification threshold so you’re not deluged with constant beeps!). You can therefore choose to use the G1 as a business machine, only notifying you for emails and text messages, or as a complete social network machine, notifying you whenever anything interesting happens ona plethora of social networks.

This transforms the way you use the phone, as it becomes an extension of the social web, and means it’s always got interesting info to show you!

Android Applications – are they really any good?

Next comes one area of the G1 that I was initially sceptical about, but hoped that my fears wouldn’t be realized – the Android Marketplace. One of the great success of the iPhone was its extensiblity through the iPhone App Store. Google (and now seemingly every other smartphone manufacturer under the sun) hoped to emulate that success with its own applications store. 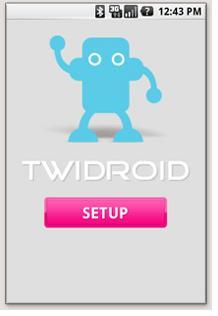 Where Android really shines over the iPhone, though, is the openness of the design. Literally every hardware feature of the G1 is available to any developer, and although Google can still nuke apps if it doesn’t like them (which is hardly in the spirit of openness), it’s at least not quite as random as Apple is when it decides to pull an app. Better still, the apps all have the ability to do so much more on an Android phone than they can on an iPhone, because there’s so much more technology under the hood that they’re allowed to access. 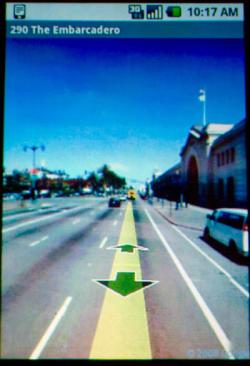 So what kind of features are we talking about? Well, take Google Maps. You can go to a town and call up its Street View (if the Google Street View vans have covered it). Instantly, the StreetView of that particular road is called up. Don’t forget, though, that the G1 knows where it is in space. So hold the phone up, and you’ll see a shot of the road. Physically turn the phone, and Street View will turn with you.

I checked out a view of the house where I was born, and it was like looking through a window into my old stomping grounds. As I turned around, the changed with me, letting me see my old friends’ houses as I turned. This feature really has to be seen to be believed.

Other applications I use include:

Obviously, this isn’t a comprehensive list, and just talking about the apps doesn’t give a full impression of what can be done with the G1. Suffice to say that every app listed here works exactly as it should, with minimum fuss, little lag in terms of execution and download speed, and a whole lot of intuition.

My E90 always had the problem that it was slow. You could, for example, use it to browse the Web to find the answer to something when you were out and about (such as in a pub quiz, or bus or train times). The browser was so slow at times, though, that it meant real-time use was only ever done if it was an absolute emergency. I generally used it to while away the time while waiting for something. Useful in its own right, but not exactly game changing.

For example, I once tried to use Nokia Maps to locate an ATM near Leicester Square in London. The whole thing was so slow, though, that it was quicker (not to mention safer!) for me to wander randomly around Leicester Square than it was to zoom into Leicester Square and see the names of the roads that the ATMs were located on.

This is not a problem for the G1. Google Maps loads smoothly and super-quick, and sliding the maps around with your finger is a whole lot easier than scrolling them around with a keypad. 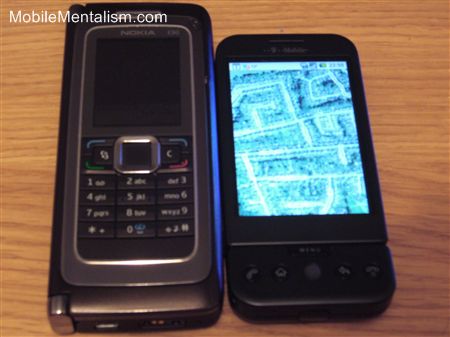 This has only been a snapshot of what you can do with the G1 – I’ll be providing videos of it in action in the next few weeks to show you what it can do in real time. It’s the combination of its speed, its intuitive interface, its always-on data connection and the superb array of sensors that are all accessible by the applications that makes it such a rich and rewarding device.

It’s not just everything I ever hoped it would be – it’s so much more. It’s the phone I’ve always dreamed of! I am now, literally, tethered to the Web 24/7, for better or for worse!

I give it 9/10 – it would be 10/10, but it hoovers up the battery at an alarming rate, and no phone this ugly should get a 10! That said, it’s much smaller than my old E90, so although others have said it’s too big, for me it’s a positively svelte phone!

Note – the photos I took of the G1 are awful! I’ll do some better ones for next week.

Videos, pictures and review of the T-Mobile G1

21 things we know about the G1 Android Phone