Google’s next part of its world domination is Google TV, which I have to admit is looking pretty darn good. Google TV is basically Android on an HDTV, complete with apps, Web browsing, a unique new programme guide that integrates TV programming with videos on your PC and YouTube seamlessly, and, of course, a superior display!

Think of an Android phone with an enormous super high def display and no touch, and that’s pretty much Google TV! 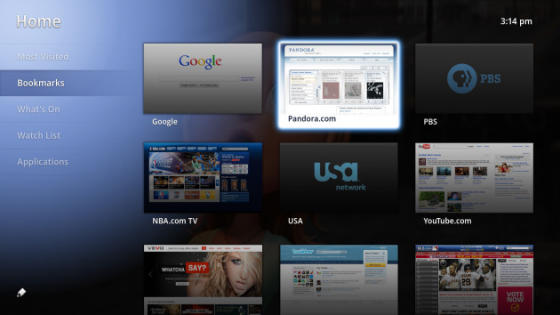 The interesting thing about Google TV is that you can control it via an app on your Android phone or iPhone, effectively turning those phones into remote controls. This has been possible to a degree before on Samsung phones and Samung TVs, but what Google has made possible is for universal remote control – i.e. you’re not tied into a particular TV manufacturer’s technology for it to work.

Google TV, like Android on smartphones, is independent of the manufacturers who use it. Some TVs, such as Sony’s forthcoming models, will feature Google TV bui’t-in, but you’ll soon be able to buy Google TV Set Top Boxes from the likes of Logitech.

So pretty soon we’ll have Google on our PC, Google on our phone, and now Google on our TV! Coupling them all together with an Android app and an iPhone app is a seriously smart move by Google, as you can bet that only an iPhone will control Apple TV.

If you’ve got an iPhone, but your partner’s got an Android phone, which Internet TV are you going to buy? The one that you can both control, of course, and that means Google.

Apple really need to learn that giving the user control is ultimately the best policy!