Google really knows how to put on a show! This video is a visualisation of the acitvations of new Android devices over time. It’s therefore a chart of the evolution of Android from its origins with the T-Mobile G1 on October 2008, through all the 178 different Android devices that have been released since then, culminating with the Nexus S.

I’m not sure what’s more amazing, though – the beauty of the visualisation, the huge growth in Android around the world, the explosion in activations when a flagship phone launches (such as the Motorola Droid and the Samsung Galaxy S) – or the fact that Google has stored each and every activation over time, together with its location and time of activation! 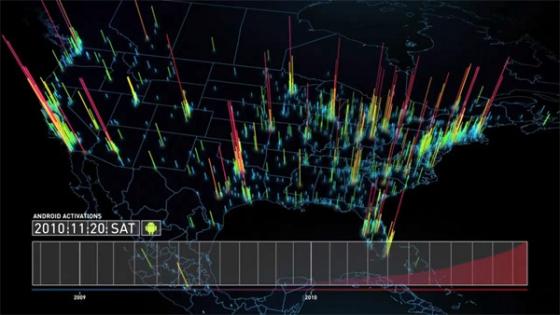 One thing I love is the tiny number of activations in the UK in the early days – and how one of them, late in March in 2009 near London, is my own T-Mobile G1 being activated for the first time. Kind of makes me feel all warm and fuzzy!

Back then, Android wasn’t a success. It was being hyped as “the next iPhone killer”, but although clearly game-changing, it wasn’t anywhere near the iPhone in terms of style, usability or success.

It’s all very different now, of course. Not only has Android overtaken the iPhone in terms of sales, it’s also surpassed it in terms of features, and is even on a par as far as usability is concerned.

This video, then, is a timely reminder of just how far Android has come in such a short space of time. Although the pre-Android days seem a long time ago, in reality the platform is just 2.5 years old! To put that in context, when the very first Android phone was launched on October 30th 2008, “James Bond – Quantum of Solace” was the number one film at the cinema, and Pink was at number 1 in the UK music chart with “So What” – they’re not exactly what you call ancient history!

Android has come a very long way in a very short space of time.