Today it’s HTC’s turn to show us what it’s got at MWC 2011, and the first thing on display is the HTC Flyer, a 7″ Android tablet that we all knew was coming. What we didn’t know, though, was that it would sport a 1.5GHz single-core processor, and – gasp! – no Honeycomb!

Apparently, HTC didn’t have enough time to adapt its glorious Sense user interface onto Honeycomb, so they’ve had to put Gingerbread on the Flyer instead.

Not just any version of Gingerbread, though – apparently this one is version 2.4!

Confused? Me too! Let’s try and work out what HTC has done. 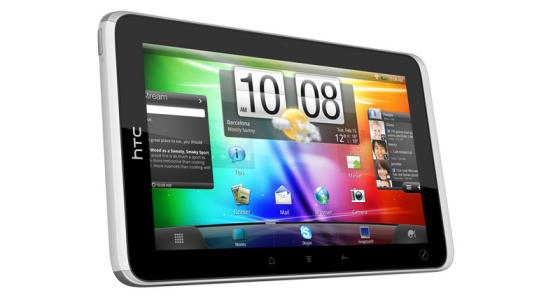 HTC has done something with the Flyer that should be royally encouraged – they’ve actually been innovative, releasing an Android tablet that’s very different from its competitors.

More intriguingly, the underlying hardware is very different. Whereas virtually every other Android tablet uses the dual-core 1GHz Tegra2 processor, the Flyer uses a single core Snapdragon processor that runs at 1.5GHz. That’s 50% faster than a single core of the Tegra2, which means most apps will fly, but because it’s only single core, it could struggle (relatively speaking at least) when more than one app is running at the same time.

On the back of the Flyer is a 5 megapixel camera, which is disappointingly lower than the 8 megapixels of the Galaxy Tab 10.1, and only as good as the LG Optimus Pad, but that, of course, can take 3D photos, whereas the Flyer can only take 2D pics.

The front facing camera is 1.3 megapixels, which is also not as good as the Galaxy Tab 10.1’s 2 megapixels camera, but at least it supports HSPA+ for super-fast 20Mbps+ download speeds. 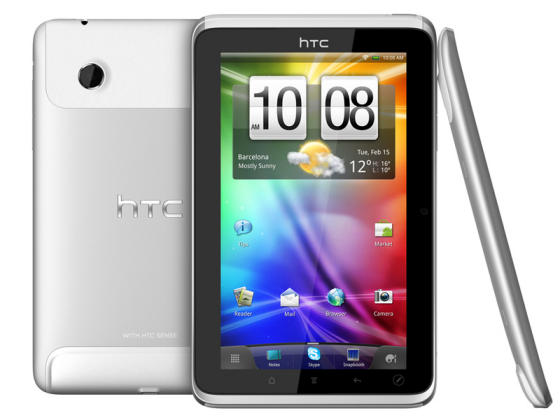 So where are all the innovations, you wonder? Firstly, it’s got HTC’s Sense UI on it, which is different from Honeycomb on the other Android tablets. This version of Sense has been updated and optimised for tablets, and features a few nice touches such as the icons moving slightly whenever the tablet is tilted.

More impressively, though, HTC has given the Flyer a stylus. You don’t need the stylus for general operation – it’s still a capacitive touchscreen that responds beautifully to touch. But should you want to draw anything on the tablet or write anything down, the stylus is perfect.

And here’s where it gets interesting. You can write notes down and record audio at the same time. Later on, simply press the stylus onthe word you wrote, and whatever was said at the time you wrote the word will be played back. In other words, the HTC Flyer features the same capabiltiies as the LiveScribe digital pen, but without you having to buy special notepads! 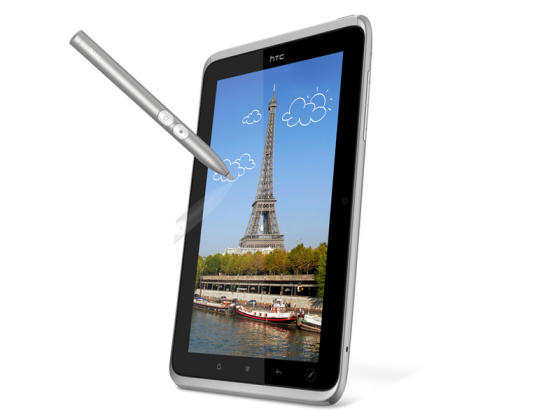 If other tablets adopt this technology – and I see no reason why they won’t – then the LiveScribe pen is dead in the water!

You can even draw on Web pages using the stylus, take a screengrab and then either save the screengrab or email it tofriends or colleagues – you can even share it on Facebook.

This will be invaluable to teams of designers who need to collaborate on design projects.

HTC has also installed OnLive’s amazing game service onto the HTC Flyer, giving you the ability to play console-quality games on its slick 7″ screen.

And by console-quality I don’t just mean old consoles from the ’90s. OnLive is a cloud-based streaming game service that effectively plays the game on its servers and streams the screens to the Flyer. The Flyer just has to play the streaming video that’s downloaded to it, while the user’s inputs are sent to the servers to control what the game does next.

It’s an amazing service, and it means the Flyer doesn’t need fancy 3D graphic hardware, as all the graphics are generated on the server, which is capable of generating PS3-quality graphics.

If you’d rather play the games on your HDTV, though, just hook the Flyer up to your telly, and it will stream the games from OnLive’s servers and pipe them through to the TV.

How does the HTC Flyer compare to the other tablets?

HTC has been quite bold with the Flyer, yet also quite conservative. The innovations it’s added to the tablet in the form of the stylus, OnLive and Sense shows that company is determined to forge its own path and not follow everybody else in the market.

There are certainly reasons to choose the Flyer over other Android tablets, which is not quite so easy to do for the other Honeycomb tablest, all of which look the same.

However, it’s a surprise that HTC has chosen such a small form factor, and have used lesser specced hardware such as the 5 megapixel camera. And although Honeycomb will be coming to the Flyer sometime this year, I can’t see the Flyer sellin gall that well with Gingerbread on board, as it makes the tablet look too much like a phone still. 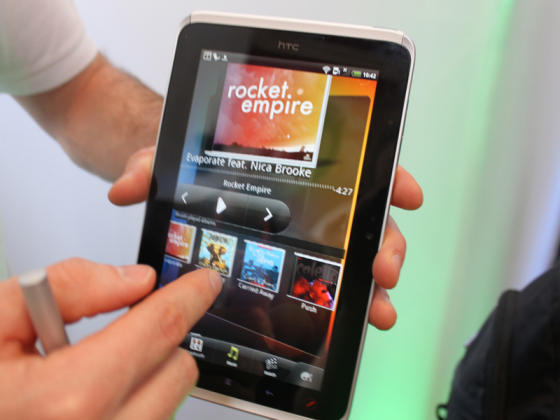 This won’t be the last tablet from HTC, though, and I expect the next generation will be mcuh improved. Equally, it’s worth bearing in mind that these tablets haven’t been compared side by side yet, so full conclusions stil can’t be drawn until they’re out on sale.

It’s good news that at least one manufacturer is prepared to stand out from the crowd with Android tablets, though.