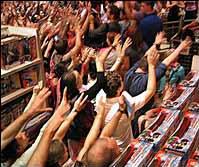 According to a report by In-Stat, mobile music services—either in the form of downloadable music files or broadcast digital radio—have greater interest among US mobile customers than gaming, an application that is now providing some of the greatest mobile data revenue. However, the ecosystem that will permit widespread uptake of music applications is not yet mature, and shows signs of being put on hold until key issues, such as pricing, revenue sharing and Digital Rights Management (DRM), can be worked out, the high-tech market research firm says.

“The window to catch a group of wireless users we call ‘Mobile Music Intenders’ – those interested in mobile music services – may be closing soon,” says David Chamberlain, In-Stat analyst. “They’re ready to buy new handsets and they’re willing to pay extra for handsets that play music. Without available music services or handsets, carriers may miss this opportunity to grab what could end up being a very lucrative mobile music market.”

Motorola and Apple have alrady demonstrated this rather neatly with the ROKR, a much-overhyped iTunes-based music mobile phone that must take its music from a PC or Mac – not over the air.  Accordingly, mobile networks miss out, as they clearly cannot charge for data they do not carry. However, this is rather immaterial as it ignores the impact of Mobsharing – letting users of such phones share music between themselves freely over a Wi-Fi connection. Unless there’s a revolution in music distribution, it’s not just the mobile operators who will miss out…

Where the revenue can go

You, the user, buy your new music mobile phone that all the major manufacturers have been telling you is the thing to own this year. Whether it’s Nokia, with its N-series and now the 3250, Sony Ericsson, with the W800i and other Walkman-branded phone, or Motorola, with its ROKR, and all the other brands in-between, every phone and his dog is now a ‘music mobile phone’, offering all different ways of playing music. Music, however, is not free. So where does the money go?

Clearly, the artist should get their cut. Suppose you pay the artist via CD, and then transfer the tunes onto your PC as MP3 files. You then download the MP3 files onto your mobile phone, and listen to it as you wish. Artist gets their cut, you get to listen to your music, everyone’s happy…right? Well, no. As In-stat mention, the mobile network operator’s no longer in the loop, so misses out on some large files that could have been downloaded over their network. Far more importantly, though, Mobsharing, in which users freely swap music over a Wi-Fi connection, though not a reality yet, has the potential to cut the artist out of the loop as well, as users swap music with each other freely. So it’s not just carriers who could miss out – artists could as well.

You can’t prevent Mobsharing by stopping device manufacturers from implementing all these tasty features, though. Wi-Fi is a valuable feature in its own right, and no more an incitement to illict copying than the mobile data network itself – it’s just another data communciations channel. So prohibiting file sharing via Wi-Fi is absurd. What about Digital Rights Management (DRM), ensuring the user can only listen to music they’ve paid for, and preventing music that’s been copied from being played. Well, its a possibility, but a hard one to enforce. Unless device manufacturers limit their devices so that they only play music that has some form of DRM built-in, you won’t stop users putting non-DRM easily-shareable MP3s onto their phones. And if they do limit their devices, which of the hundreds of DRM standards are they going to use? Such a system relies on all manufacturers limiting their devices – it only needs one Wi-Fi enabled phone that supports non-licensed MP3s for Mobsharing to become a reality. So manufacturers would need to ensure that the DRM they support will be a common one, otherwise the device will become unusable.

I could go on, but I think the point has been made. Preventing Mobsharing will be impossible. So what to do about it? You can’t outlaw it, you can’t stop people sharing their music when there’s no network to trace, and you can’t enforce DRM. Music execs have only one choice – embrace it. Recognize that MobSharing will happen, and work on new business models that capitalize on it, rather than try to prevent it. Run those MobSharing sites yourself. Create links with StarBucks, and get a cut of the coffee revenue in exchange for driving people to StarBucks. It’s the perfect solution: if you’re a music exec, you want your music disseminated to as wide an audience as possible. You want your music listened to and talked about. Equally, if you’re StarBucks, you want as many people as possible through your doors, drinking your coffee. So setup the best MobSharing service in your store, advertise it like crazy, make sure the latest tunes are played there so people come to your store to hear them first. Music execs, charge StarBucks for the privilege of distributing the latest tunes first. Get extra bucks by charging for ringtones of those same tunes. You get the revenue, the people get their music, the artist gets their cut, everyone gets their coffee, the world’s a happy place again!

Of course, the network operators don’t get their cut, but they were never going to, not with mobile data prices at the rate they’re currently at. Only if they reduce their rates will people use the mobile network as a file-sharing medium, as it can’t compete with the cost of Wi-Fi (i.e. free). Once the operators do reduce their costs, however, something very interesting will emerge – – the mobile networks become the short-cut in the Small World network that MobSharing needs to become if it is to be a major music distribution channel.

Small World networks are a type of network in which you have local nodes connected to each other (e.g. the people sharing music at
StarBucks), and the odd short-cut to more distant nodes – that is, your less-local friends, who you send music to via the mobile network. Other types of Small World networks include the web, P2P networks, even cities and power lines. But sticking to MobSharing, the free Wi-Fi networks let local users swap music freely, while the mobile network lets the locally shared music be shared to a wider audience, thus populating more remote MobSharing networks, and providing a channel for the music to be disseminated nation- or even world- wide. Now the operator gets their cut, and everybody truly is happy.

Mobsharing – the Future of music distribution

Mobsharing seems destined to become a reality in one form or another. Two years from now, all phones will be Wi-Fi enabled. It only takes a few enterprising individuals to setup web-based services identifying the best Wi-Fi hotspots for music sharing, and then Mobsharing will really take off. Already the mobsharing.com domain name has been reserved (and not by me, either – dammit!) – there’s money to be made here, a revolution in the air, a real social change about to take place. When it happens, and it’ll happen soon, just remember it was MobileMentalism.com that first introduced you to the MobSharing concept.