Nokia’s mobile OS, Symbian, has been showing its age recently and is in desperate need of a spruce up if it’s to compete with the plethora of new toucschreen interfaces from virtually every other mobile manufacturer.

In fact, now that Microsoft has completely rewritten Windows Mobile to rave critical acclaim, Symbian is now officially the most old-fashioned looking OS on the market!

So Nokia needed to do something, and quickly. The result is two new versions of Symbian: the Symbian^3 and Symbian^4 operating systems, two different generations of the OS that are being developed in parallel.

After the jump, we’ve got a video demo of Symbian^3, which will be released on new phones later this year. 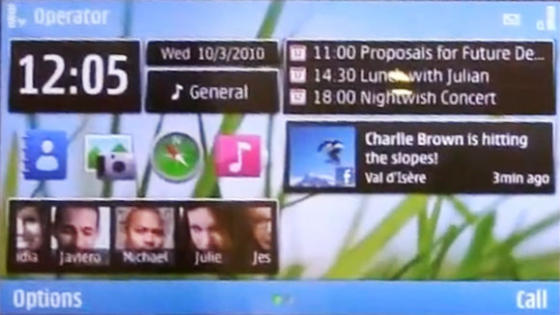 Without further ado, then, here’s the video demo of Nokia’s Symbian^3. The demo is being held on a laptop rather than a phone, but this is just because it’s a development environment. What you see here is the real deal, and will be on Nokia phones in the middle of 2010.

There are a couple of points to note about Symbian^3. Firstly, it’s not exactly a step change in terms of innovation. In fact, it’s not that different from the Nokia N97. It’s more fluid and the overall experience is better put together than the N97, but it’s still not in the same league as the iPhone, Android and Windows Phone 7 Series.

That, though, is intentional. Symbian^3 is meant as a sticking plaster – it’s designed to get Nokia’s phones up to the same levels of user experience as the competition (which, looking at this demo, it doesn’t do), while Symbian^4 is designed to provide the real innovation.

The problem is, Symbian^4 won’t be released until 2011. With the latest Android phones providing innvoative user interfaces seemingly every week, and increasing rumours of a new iPhone 4 being released this year, Symbian^4 is going ot have to be pretty special just to compete.

We’ll have to wait, of course, to see whether Nokia can fight back effectively. They certainly shouldn’t be ruled out as they’re a ferocious competitor with a history of genuine innovation. I just hope Symbian^4 will be a lot better than Symbian^3.

Video of Nokia MeeGo in action

Want to know why Symbian lost the app war?