Google has announced App Inventor for Android, a brand new Web-based app that will not only fundamentally change the way mobile phones are used and perceived for years to come, it’ll also completely transform Computer Science.

Before you say “Whoa, Mike’s taken an Android FanBoy pill too many!”, allow me to explain…

So yes, if you feel you’ve got the perfect idea for a new mobile Twitter client in your head, but you’ve no idea how to implement it, then sign up App Inventor for Android now and start creating it just by dragging and dropping simple visual components. 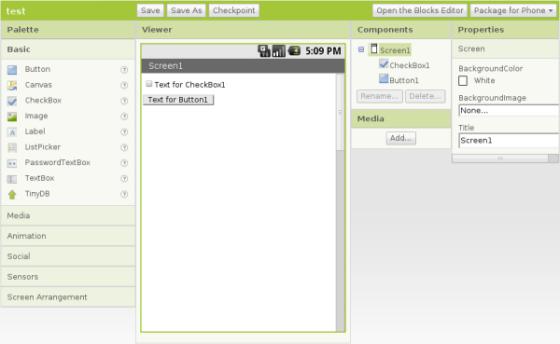 Is it really that simple?

Coding is hard. Coding mobile apps can be even harder, due to the restricted functionality of the device, and its battery and screen limitations.

So obviously creating Android apps must be really hard, no?

Well, no! What Google have done with App Inventor is to completely rethink the way apps are created. Using an interface that’s similar in concept to Yahoo Pipes, which lets you create new Web apps in a visual way, App Inventor lets you create apps using a logical series of puzzle-like components that interconnect according to the functionality and interactions you want them to have.

It’s easier to see than to say, so here’s a video:

That’s cool. I mean, if you’ve ever coded before, and particularly if you’ve ever tried to code a mobile app, that’s seriously cool! That’s the most ridiculously easy way to code in the history of coding!!

What can you do with it?

It looks great, but what can you actually do with it? Just how powerful is Google’s new too? Well, according to its Web-site:

Because App Inventor provides access to a GPS-location sensor, you can build apps that know where you are. You can build an app to help you remember where you parked your car, an app that shows the location of your friends or colleagues at a concert or conference, or your own custom tour app of your school, workplace, or a museum.

You can write apps that use the phone features of an Android phone. You can write an app that periodically texts “missing you” to your loved ones, or an app “No Text While Driving” that responds to all texts automatically with “sorry, I’m driving and will contact you later”. You can even have the app read the incoming texts aloud to you (though this might lure you into responding).

App Inventor provides a way for you to communicate with the web. If you know how to write web apps, you can use App Inventor to write Android apps that talk to your favorite web sites, such as Amazon and Twitter.

Check out some of Google’s examples of apps built with App Inventor.

OK, so it’s cool, but how is it going to change the world? Here’s how:

1. An explosion of Android apps

App Inventor democratizes the creation of Android apps, which will lead to an explosion of new apps that will fill every niche ever thought of (and many many more you never even knew existed!).

Currently the iPhoone has twice as many apps as Android, but with so many people creating Android apps with App Inventor, that will change very very soon.

Obviously quality will be an issue, so there’ll need to be something to filter out the crap and surface the good apps. Some kind of search engine for apps, you could say. Hmmm, maybe a Google for Android apps?! Yep, that’s coming!

2. The birth of the Read Write App

Mobile phones have already evolved into hosts for apps, but most people see them as read-only: you download an app and use it, you don’t write your own.

With App Inventor, all that changes. Just like Web 2.0 fundamentally transformed the Web from a read-only medium to one in which we all create as much as we consume, and share whatever we want, so too will App Inventor transform your humble smartphone in a similar way.

You won’t jus tbe able to use other people’s apps. You’ll be able to create your own. And I really do mean you: you don’t need to code, even your Gran can write an app!

3. Harnessing the untapped demand of the mobile youth

When the Web first gained traction in the mid-90s, everyone wanted to create their own Web page. And guess what? They could – at least in the early days!

HTML back then was easy – even my Dad created a Web page! Suddenyl, everyone with even half an idea was creating Web pages and Web sites, and enjoying doing it.

That same passion, that same demand for creating something uniquely yours is still there, but it’s moved on from Computers and on even from the Web.

But mobile? That’s what’s capturing everyone’s interest at the moment, and in particular, the one group of people who really matter – kids.

If that sounds too unrealistic, then you haven’t spoken to an 18 year old in Higher Education. Most of the students I teach, plus the younger ones looking ot enter University, are either eager to learn how to code their own mobile app, are already trying to teach themselves, or are asking us if we have a dedicated mobile app module.

That same passion that I saw 15 years ago is now alive and on fire in the eyes of people who’ve grown up with mobile phones and the Web, and who now want their chance to make the technology they use truly their own.

I’m a lecture in Computer Science and have been since 2002, so I’ve seen first hand how 18 year olds perceive Computer technology. As time has gone by, throughout the noughties, they’ve been increasingly bored by it.

They see it as too difficult, too boring, something that’s completely disconnected from anything that’s real to them.

Sure, they use computers all the time, both at work and at home, but the type of stuff they’re taught at A level is really trivial and really boring (unless you count working on Spreadsheets as really fun). Worse, when they see how much code is needed to create something that they use all the time, such as Facebook, and how they’ll be just one very small cog in huge machine, there’s absolutely zero incentive for them to want to go into Computer Science.

But an app that lets you create mobile apps – on your own, without the need for giant teams, without the learning curve, or the tedium of the spreadsheet, and on a device that an 18 year old can genuinely feel passionate about and connect with – that’s a completely different story.

That’s a world where millions of 18 year olds, with all their creativity, competition, imagination and energy, can suddenly realize their ideas simply and easily – and then share them with all of their friends.

And while they’re doing that, they’re learning the problem solving skills needed to learn Computer Science, which in turn doesn’t look so scary after all?

Check out this other video to see what I’m on about!

5. The Future is Android

App Inventor is the final piece in the puzzle that Google needs to win the smartphone war comprehensively. Not immediately – it’ll take a few years – but without doubt, they’ve just sown the seeds to ensure that a billion people will be buying Android devices in the future.

How can I be so sure? Well think about it. Apple currently leads the smartphone race, but it’s a completely closed system. As if it wasn’t difficult enough creating apps for the iPhone, there’s no guarantee that Apple will even accept them for sale.

So creating apps on the iPhone is difficult, as is distributing them.

With Android, that’s completely reversed. Already selling and your distributing your apps is much easier, and now creating them is simplicity itself.

Couple that with the fact that millions of kids will be taught how to create their own apps through University courses, colleges and Schools, and pretty soon you have the entire World’s kids growing up learning how to code for Android!!

Google just created themselves an army of Android developers in the making. Add to the mix the fact that all manner of Android devides are ready to be unleashed, from tablets to PCs to TVs, all of which can benefit form App Inventor, and that army suddenly has a huge battlefield to play on!

This is the most excited I’ve been about the future of software in years. Let’s just hope that Google really does deliver.