Why is it that when a new product carries a fabulous brand, chances are the product itself will be poor, or the run up to the big launch will be farcically fumbled? Take Sony’s new Walkman phone, the W800i. Slated for release mid-August, the big launch is on-track, but you look at the product and you think ‘oooh – a 512MB MP3 player – how marvellous!’ Its sonic ability may sound great, but 512MB doesn’t exactly set the world on fire does it? It smacks of a missed opportunity.

But legendary though the Walkman brand undoubtedly is, it’s not really what you call cutting edge any more. That honour goes to Apple, with its iPod and iTunes brands, and so it is to Apple that Motorola turned to when developing its latest music-focused mobile phone. You can see how Motorola’s thought process went: “iPod is cool, Apple is hip, people actually use iTunes, an iPod Motorola phone will sell shed-loads – we’ll be rich!”

And of course, it will sell by the bucket-load – if they can actually get the thing out the door!

A History of Hype

Motorola first announced it was working with Apple on July 27th 2004. Since then, there has been a fervour of excitement from ardent fans of the iPod, frequent press releases, sightings, more hype, the sight of expectations raised, and even ‘sneak’ pictures – but no phone.

The phone, trendily dubbed the E790, was meant to be debuted at both the CES and the CeBit exhibitions earlier this year, but Motorola had to pull it at the last minute, as some of the carriers had issues with it. It seems that, somewhat bizarrely, the original plan had the user downloading music files from the iTunes store onto their PC (or, as Apple hoped, a Mac of some form), and then uploading them onto the phone via a USB cable or Bluetooth. Motorola clearly forgets from time to time that these new-fangled mobile phone things are capable of downloading things over the air on something called a mobile phone network, but luckily the operators were only too happy to remind it, as they saw a large slice of revenue vanishing in front of their eyes, as tunes downloaded over their networks can be charged for, whereas uploading via PC cannot!

As can be seen from the BlogPulse trend tracker chart (left), talk fired up again in February 2005, when Motorola announced that the E790 would not be the first iTunes phone; rather, the somewhat better-named ROKR (note I only said somewhat!) would be the first, and it would be released towards the end of summer 2005 (which, in Britain, is usually about May, but Motorola actually meant August!). After the announcement, Motorola proudly proclaimed “and no, it won’t be the E1060 either!” So, the ROKR it is, then!

Well, now it’s getting close to the end of summer, and the hype is starting to build. Some sneaky pics were leaked out in late June, showing possibly a prototype, possibly a set of be-Photoshopped images of what some iPod-Motorola fan boy would just die to see (see left). Following hot on the heels of this scoop, Engadget.com thought they had their own, asking us to “Say hello to the Motorola E790 Apple iTunes phone!” – but as we know, this was wrong, just…wrong!

Motorola then promised to show us the phone at their MOTONOW analyst meeting, but left it on the stage very far from prying eyes (and MotoRazr.com’s camera! See image, below). Motorola wanted to go further and show us a working prototype in detail, but Apple said sternly to its naughty child “no, you must wait, we at Apple do not do prototypes!” 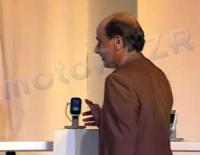 So where does all this leave us? Well, rumourssuggested Motorola would release it at the UK’s V festival (August 20th – 21st) – but they didn’t. However, a release is imminent (no, really!). New pictures show the phone as it will be sold (see below), and it has to be said, it’s a real let down! Compare this dull design with Motorola’s fabulous RAZR, and you wonder what on earth the hype is all about (what’s that? The hype is because it looks so poor compared to the RAZR? Oh…!)

That’s the problem with fan-boy Photoshop pics, I guess – they always look better than the real thing. After all the hype, it seems that all we’re getting is a boring white candy bar phone with an MP3 player and a 0.3 megapixel camera. Meanwhile, Sony Ericsson have released their Walkman phone, Nokia are about to release their 4GB hard-disk-based, WLAN-equipped N91, and both are equipped with 2 megapixel cameras. Motorola are clearly pinning their hopes on music as the fad of the week, but if they and Apple don’t get their acts together soon, the music-focused phone fad will pass, and we’ll be left with yet another MP3-playing phone that just happens to have an iTunes sticker on it. See what I mean about the Perils of the Fabulous Brand?