Strong rumours suggest that Nokia could announce it’s partnering with Microsoft to create a Nokia phone running Windows Phone 7. Nokia is making an investors speech in London on February 11th, which apparently will be focused on the company’s future strategy, and it’s during this speech that the announcement is expected to be made.

Rumours between Nokia and Microsoft have been circulating for some time, but this one seems to have particular strength behind it because it’s been reported by the New York Times and shares in Nokia have risen becuase of the rumoured tie-up.

So what exactly are we expecting Nokia to announce, and what impact will it make on the mobile world? 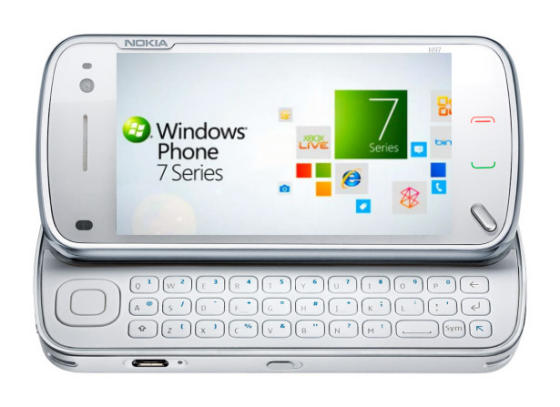 The current rumours suggest that Nokia will develop a Windows Phone 7 device to finally compete with the likes of the iPhone and Android devices, which have been devouring Nokia’s market share as the mobile world turns towards smartphones and away from feature phones.

To show just how much market share Nokia has lost, think of this: Nokia was the market leader in phones in the US in 2002. Today, its market share is just 2%. The world has moved on and has left Nokia behind. If Nokia wants to re-enter the US market (which it’s publicly stated that it does), it needs to do something extremely radical – like using someone else’s OS.

Nokia has traditionally never used technology from other companies, even going as far as buying Navteq for $8 billion a few years ago when it launched the first GPS phones back in 2007. But although this strategy has worked with hardware, it’s not been able to keep up with software innovation, and Symbian, it’s own mobile OS, is simply not up to the job of competing with Apple or Android.

But Microsoft’s Windows Phone 7 is. It’s a brand new OS that’s received widespread acclaim from the industry. Although still not a proven OS in terms of sales, it’s clearly leagues ahead of Symbian, and is a genuine competitor to Android and Apple, which Symbian simply isn’t.

In short, it makes sense for Nokia to abandon its “not invented here” mindset, to adopt someone else’s technology if it’s clearly better, and to lead the company back on the path to growth and success – just as Motorola, Sony Ericsson and now LG have all done by adopting Android.

Fortunately, Stephen Elop, Nokia’s new CEO, has stated that Nokia was “open to create and/or join other ecosystems”, so it seems that this mindset is finally changing, and he’s an ex-Microsoftie, he clearly has the connections necessary to forge an alliance with Microsoft.

Even more promising is the news that Nokia has just opened a new developer’s office in Silicon Valley, which is certainly a better place for coders than Finland!

Is Windows Phone 7 the right way to go?

So it seems certain that Nokia has no choice but to go for someone else’s OS, and the signs all point to Windows Phone 7. But is that the right direction?

Android is a proven OS, not only in terms of sales (Samsung alone shifted 9 million Galaxy S phones last year) but also in terms of helping companies back to growth, as Motorola, Sony Ericsson and LG can all atest to (well, Motorola and Sony Ericsson can – LG have only just started an are hoping the Android fairy dust will work its magic through 2011!)

Windows Phone 7, in contrast, has not been a commercial success yet. Speaking to Pocket Lint last month, James Choi, LG Gobal’s marketing strategy director, said “From an industry perspective we had a high expectation [for Windows Phone 7], but from a consumer point of view the visibility is less than we expected.”

In other words, and as other manufacturers confirmed, Windows Phone 7 sold in fewer quantities than was hoped for.

So should Nokia go with Windows Phone 7, or would Android be the better way to go?

It’s a tough choice to make, but consider this. Windows Phone 7 is locked down as an OS – manufacturers can’t change it under Microsoft’s strict licensing rules, which means a Nokia WinPho7 device would be forced to comepte on hardware differences alone.

In contrast, Android is completely open, letting manufacturers create their own user interface on top of the stock one, which companies such as HTC and Motorola have done with great success.

So if Nokia went with WinPho7, it would need to rely on its hardware expertise alone to differentiate it from other WinPho7 phones out there. Whereas with Android, it would be free to use hardware and software to create a unique Nokia Android phone.

That said, with so few WinPho7 devices out there, it’s a big opportunity for Nokia to create the de facto WinPho7 device. But if you’re a struggling mobile manufacturer, do you really want to tie yourself so closely to a struggling and still commercially-unprvoen mobile OS?!

Finally, what about the elephant in the room – Nokia’s new MeeGo OS, jointly being developed with Intel?

Well, consider it vapourware, at least as far as Nokia’s strategy is concerned. It’s too late now for another OS to take on the likes of Apple, Android, RIM and WinPho7. Just as with the desktop wars of yesteryear, there was only ever room for three main OSes, and it was Microsoft, Apple and the Unix/Linux collective that remained standing while other OSes fell by the wayside.

So it will be with smartphone OSes. As the phones become ever more powerful, and with new phones such as the Motorola Atrix actualy replacing our desktops, the operating systems become more important than the hardware, and there’s only room in consumers mind for 3 or 4 OSes at the absolute most.

Interesting times, then, for Nokia. We’ll let you know what they announce on February 11th. That’s going to be the start of one busy week!