This is the new Motorola Droid X. Before you do a double-take, the person holding it is not teeny-weeny – it really is that big! So big, in fact, that with a screen of 4.4″, it’s only beaten in size by the Dell Streak. But the Streak, with a 5″ screen, is technically a tablet not a phone, leaving us scratching heads wondering where the boundary between phone and tablet now lies. At 4.7″ perhaps? Or maybe 4.8″?

Who knows – either way, that 0.1″ is going to make a huge difference to the marketing department of whichever company is first to release a 4.7″ device!

More details of the Motorola Droid X after the jump. 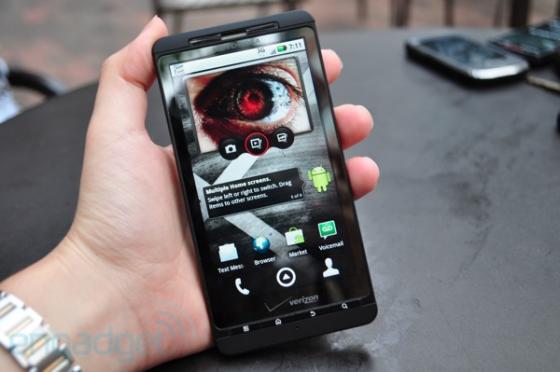 The Droid X, apart from its huge size, throws in a few other tasty treats for smartphone fans as well. For a start there’s an 8 megapixel camera (although early reports suggest it’s not actually all that good!). There’s also a video camera capable of shooting 720p HD video, an HDMI port, a 1GHz CPU powering things, and a huge 8GB of storage built-in.

Another benefit of the huge size of the Droid X is how it displays photos. It’ll come with a multimedia cradle, turning it into a digital photo frame, video viewer and alarm clock. Genius!

Motorola have also improved upon the well-received MOTOBLUR interface, and together with the huge screen, apps and Web pages look superb on it.

One thing they have removed, though, is the keyboard, but don’t despair – despite the Droid X being touchscreen only, Motorola have installed the excellent Swype app for text entry.

Keyboard aside, the only drawback to the Droid X could be battery life, as with an 854 x 480 screen resolution and 1GHz CPU, the Droid X is going to require some serious power to keep it running. 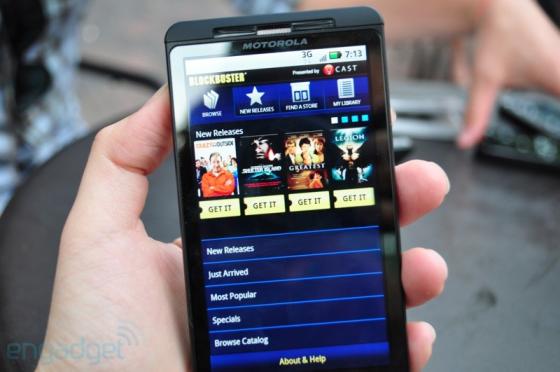 The Droid X is the latest example of an interesting new trend that’s emerging in the mobile device market: SuperSize vs SuperSkinny! Earlier this year we had a plethora of smaller and smaller phones, such as the Xperia X10 Mini (2.5″ screensize) and HTC HD Mini. Since then, we’ve had a new raft of phones that have pushed the super-large barrier, such as the HTC Evo, HTC HD2, and now the Droid X.

It’s an interesting divergence in size, with both trends running away from the traditional smartphone screen size of 3.7″ in opposite directions. 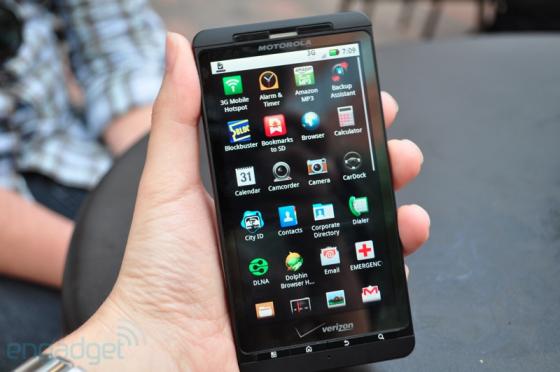 Quite where this will lead is anyone’s guess, but personally I think it’s a positive thing. Small smartphones help spread the mobile Web concept to people who traditionally wouldn’t be seen dead with a huge geeky smartphone, while the heavyweights push the boundaries of what can be done with smartphone technology.

Ah, innovation driven by competition – you gotta love it! Now if only someone could tell Apple that!