This gorgeous device is the new Samsung Galaxy S2, Samsung’s first dual-core Android phone that will debut at MWC 2011 in Barcelona on Monday. The S2 will be Samsung’s flagship phone for 2011, with the company hoping it will match the success of its precesoor, the Galaxy S, which sold over 9 million units.

To help it achieve that lofty goal, Samsung has given it the best possible start in life with some truly great features and a user interface refresh that looks not unlike that of the tiled interface of Windows Phone 7. Certainly it’s a very different look from HTC’s Sense, Motorola’s MotoBlur and Sony’s Ericsson’s UXP, each of which is a user interface for Android designed by those companies to differentiate their phones from their competitors…

…hang on – didn’t Nokia just jump into bed with Microsoft because it wouldn’t be able to differentiate itself from its competitors if it went with Android? Hmmmm!

But I digress. Let’s take a look at what the Galaxy S2 has in store for us. 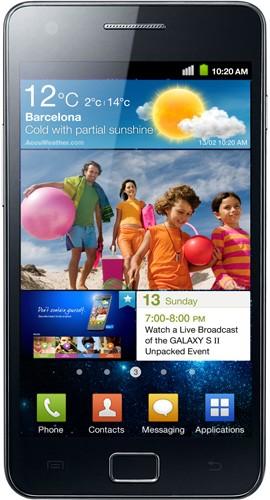 Like I said, Samsung has endowed the Galaxy S2 with some pretty tasty specs, such as:

All of which sounds seriously drool-worthy! Can’t wait to see how well it performs compared to the competition, which is also looking extremely strong.

In fact, with Motorola, LG, Sony Ericsson, HTC and now Samsung all about to release extremely polished, dual-core Android phones, the choice of phones and the amazing features that they all have this year is better than it’s ever been before.

We’re set for what could be a vintage MWC next week!

Update: Mobile Fun has already got a pre-sale page up complete with ful specs, and will be offering it for £549 SIM-free.
[Source: Engadget]