The Motorola Atrix 4G is the future of smartphones, tablets, the Web, PCs and even Microsoft, all in one amazing device.

That’s a bold statement, but you only need to see what the Atrix 4G can do to see how blindingly obvious it is – and how scared Microsoft should be!

You see, the Atrix 4G can be both smartphone and desktop PC, both in terms of software and hardware. As far as software is concerned, it uses both a full-featured desktop version of Firefox and Citrix’s Virtual Desktop software to run any software you currently use on your desktop. As far as hardware is concerned, two unique docks from Motorola enable the Atrix 4G to morph into any device you need it to be wherever you are.

That’s a pretty powerful combination! But allow me to expand a bit to show you exactly how powerful it really is. 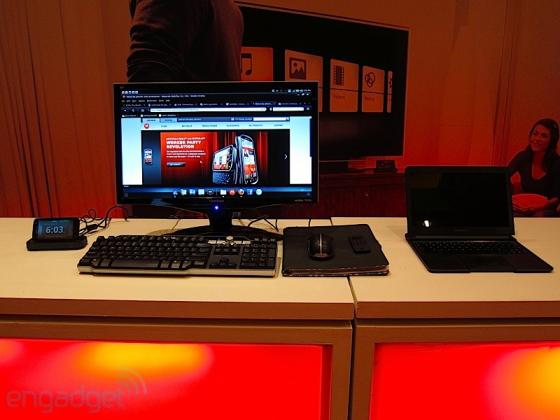 The power of the Atrix 4G

The Atrix 4G is more powerful than your laptop, your tablet, your HDTV, your desktop, and any smartphone you care to mention, and can single-handedly replace all of these devices. With its dual-core Tegra 2 processor, full 1080p HD video, 20mbps connectivity, and 1GHz DDR2 RAM, coupled with the amazing docks and Webtop app that Motorola has created, the Atrix 4G takes mobile computing – and even computing itself – into a whole new future. 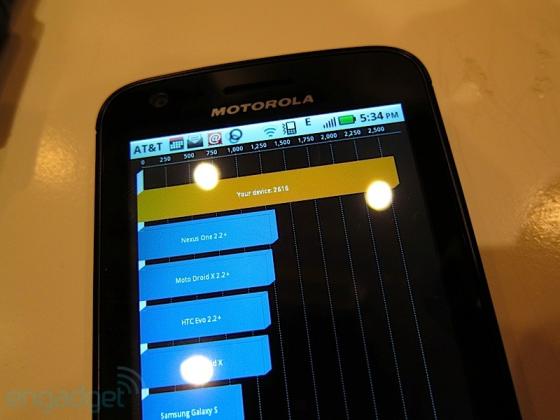 The desktop on your smartphone

The Atrix 4G comes with a fully-featured desktop version of Firefox (version 3.6 currently) built-in, so whatever you can do on your desktop browser, you can do on the Atrix 4G. That’s about 90% of everthing we use a PC for these days.

For the remaining 10% – things such as Microsoft Office or Adobe Photoshop – the Atrix 4G comes with Citrix’s Virtual Desktop software, which connects to your PC and beams your PC’s desktop to your Atrix 4G, letting you control and see your actual desktop no matter where in the world you happen to be.

As far as software is concerned, then, it really is the full desktop experience, simply because, thanks to Citrix, you really are using your own PC’s desktop!

But a smartphone is hardly a replacement for a desktop computer, even if it’s your actual desktop you’re controlling – the screen and keyboard are simply too small.

That’s where the Atrix 4G really changes the game thanks to Motorola’s unique new hardware docks.

Motorola have created two new docks for the Atrix 4G. One, the HD Multimedia dock, lets you connect the Atrix 4G to a PC screen or an HDTV via an HDMI port. The other, the Laptop dock, is essentially a barebones laptop shell which the Atrix 4G plugs into. The Atrix 4G provides the computing horsepower, memory and storage while the Laptop Dock provides the full-size screen (11″ of it) and keyboard you need for the proper desktop experience.

The two combined mean you can use your PC wherever in the world you happen to be. If you’re near a PC screen or an HDTV, just plug the HD Multimedia dock into it, slot the Atrix 4G into the dock, and your PC is suddenly displayed on the screen. Grab a handy keyboard (a Bluetooth keyboard is especially good!) and you can work on your PC remotely, using whatever screen you’ve plugged the Atrix 4G into to see your desktop, and the Atrix itself to run the Citrix client. 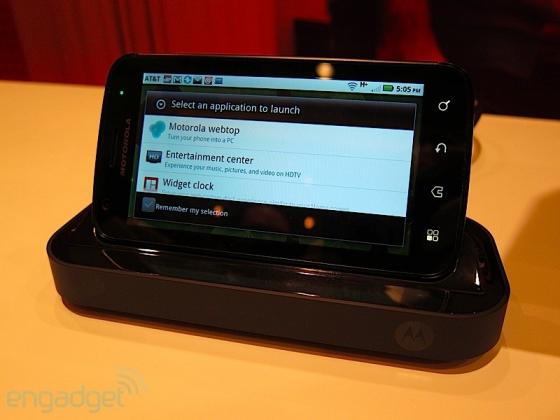 Alternatively, slot the Atrix 4G into the laptop dock, and you’ve got a full-sized laptop running your desktop that weighs just 1kg! 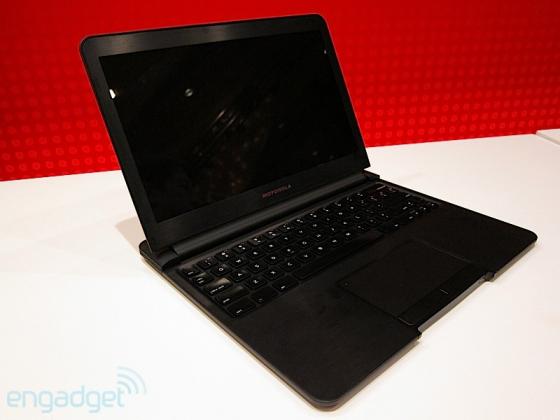 Powerful though this scenario is – and let’s face it, the ability to run your dekstop software from just your mobile phone and display it usng any full size screen is pretty powerful – it’s not even half of the game-changing power of the Atrix 4G. For that, we need to turn to the new Webtop app that Motorola have created.

And this is where Microsoft should be very scared indeed!

The Motorola Webtop is a desktop-in-a-browser that’s designed to run on normal PC-sized screens. Think Chrome OS, but using Firefox 3.6 instead. You can access all of the phone’s features via the Webtop, and obviously browse any and every Web page.

Where the Webtop really scores, though, is with its ability to transfer seamlessly from place to place, and screen to screen. 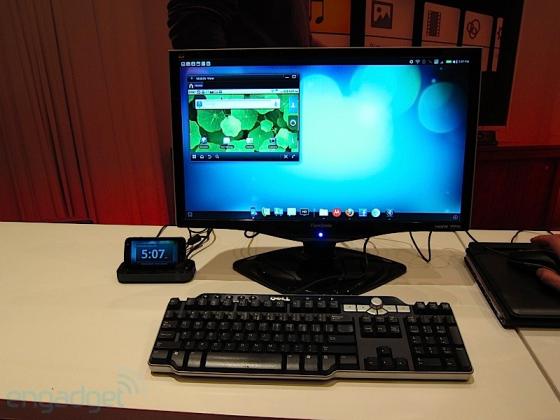 If it was just static Web pages, this would be interesting, but not game changing. But the Web is so much more than static Web pages now, with Flash 10.1 and HTML 5 making Web apps far richer than ever before. Complete Web apps let you replace virtually every desktop app you currently use.

Web apps and the power of the cloud

Web apps have become so powerful that they can do everything you currently do on the desktop. Indeed, Google’s Chrome OS is a new OS that only works with Web apps – there are no native applications for this new OS at all.

To give you an example of just some of the Web apps that are available from your browser right now, check out the following:

In fact, anything and everything you want to do, you can now do in a browser – which means you can do it on the Atrix 4G. For more Web apps, check out Go2web2.0.

What this gives you, for example, is the power to create a presentation using SlideRocket on your work PC’s browser; carry on editing it on the train using your laptop dock; practice it at home by presenting it on your HDTV; and make subtle changes to it during the meeting in which you’re presenting it, directly on the phone itself.

In other words, your work is with your wherever you happen to be (which may or may not be a good thing!).

But what if you lose your phone, or it’s stolen? It’s not a problem – the Web stores everything “in the cloud” – so just get another phone, or find another browser, and everything you’ve created is still there, ready for you to use.

The Atrix 4G is, therefore, the only computing device you’ll ever need, harnessing its own impressive hardware, the power of the cloud, and existing displays that are now everywhere, to give you the same desktop experience you currently enjoy on your PC or your Mac, and a better Webtop experience than you’ve ever imagined.

So why should Microsoft be worried?

Google’s Chrome OS was meant to make Windows redundant – it’s sole purpose is to move everyone to a world of Web apps, where operating systems are meaningless and everything is done through the browser.

This was the nightmare scenario Microsoft saw back in the ’90s, when Netscape tried to do the same thing with its browser. It’s why Microsoft went after them so hard and became the dominant browser for a long time, as if you did everything through the browser, why would you care what operating system you’re using?

Microsoft crushed Netscape by leveraging the power of Windows and Office.

Now, though, Motorola of all people have beaten Google to it by creating an effective Webtop that rivals Chrome OS and makes Windows – or any other operating system for that matter – utterly irrelevant. The power of the cloud and the benefits of the Atrix 4G’s extreme versatility are much more compelling than any operating system on a fixed desktop.

The Pocket Cloud ushers in the future

This is why Microsoft should be worried, and why the Atrix 4G represents the future of computing. It won’t be long before everyone follows the Atrix 4G’s lead, giving us a world in which we have our own Pocket Cloud with us, wherever we are. All data stored in the cloud, all processing performed on our smartphones, all apps running in the browser, all screens available for displaying our apps.

In this world, we won’t care about operating systems, nor will we care about hardware. The Motorola Laptop Dock is a laptop shell with no internal guts. It won’t be long before we have Tablet docks and other types of docks not even imagined (HP have already invented the Printing dock).

All the processing power we take for granted in our desktop, condensed down into your smartphone, which can then be transformed into any device you want it to be, displayed on any type screen, running Web apps wherever you are.

That is the future of computing.

And from a company that was staring bankruptcy in the face just 18 months ago! Nice work, Motorola!

If you want to see the Atrix 4G and its docks in action, check out this cracking video preview from Engadget.