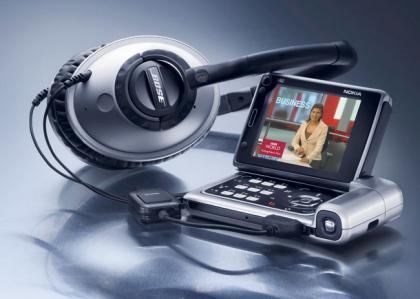 Choosing the best mobile TV technology may be more tricky than you’d think.  With the mobile phone industry betting its collective cash on Mobile TV for 2006, there are a bewildering variety of competing standards that can be used to receive your favourite TV programmes.  Which standard you choose will depend on the mobile phone handset you buy, as well as the mobile network operator you subscribe to, as different handsets and operators support different standards.
In  Europe, we have two broadcast standards, DVB-H and DAB, as well as mobile TV delivery over existing 3G networks.  In Asia, DMB is popular, most prominently supported in Korea. As a user, choosing the correct standard is crucial if you want to watch the programmes you want on your chosen handset. Choose the wrong technology, and you may find yourself with a mobile TV phone that can’t receive any TV programmes.  So which mobile TV technology should you bet your money on? Read on…!

There’s two different classes of mobile TV technology to consider: broadcast and streaming.    Broadcast technology is based on traditional TV delivered over the air via TV transmitters. You simply tune in to the appropriate frequency and watch the programmes that are constantly being broadcast by the transmitters. Streaming, on the other hand, delivers the TV programmes as data over a network operator’s existing mobile network. Because of the demands of good quality real time video streaming, only the data rates offered by 3G networks can support streaming mobile TV.
So which option should you choose? Broadcast or streaming?

The limitations of 3G mobile TV

According to a report in today’s Sunday Times, 3G networks can only support a maximum of 100,000 simultaneous viewers.  Worse, each 3G basestation can support only seven simultaneous viewers. Any more than that, and the quality of a network’s core service, voice (remember that?!) will seriously deteriorate, which a mobile network operator simply will not allow.

The limitations of broadcast mobile TV

So broadcast seems to be by far the better option.  The only problem is the technology is not quite ready for prime time.  Despite extensive trials and the agreement of appropriate TV standards, the deployment of broadcast mobile TV is being hampered in some countries by bureaucratic regulation.  In the UK, for example, DVB-H is the chosen standard, as it is throughout the rest of Europe.  However, according to The Sunday Times, the UK’s telecoms regulatory body Ofcom “has yet to allocate any radio spectrum for DVB-H services…” and will not announce its plans to do so until the end of 2006! Despite this, the major manufacturers are chomping at the bit to roll out their mobile TV devices, with next week’s 3GSM conference expecting to see a raft of new handsets that can support it.

Which mobile TV standard should you choose?

So what should you do? If you need mobile TV now, opt for 3G. Actually, if you need it now, you have no choice, as it’s the only service available! Currently, this means opting for Vodafone’s service, which in the UK offers 19 channels of Sky TV streamed over Vodafone’s 3G network for just £5 a month.  Alternatively, you can opt for Orange’s streaming service, which will cost you £10 a month for a different set of TV channels.  However, if these services become popular, expect to jump ship pretty soon.  3G mobile TV simply cannot scale, and once the service gains popularity, expect to find it increasingly difficult to access any of its channels.
So that leaves you with broadcast.  If you live in Asia, the DMB standard is the one to choose, but this of course depends on the country in which you live. In South Korea, for example, you can choose both T-DMB (Terrestrial Digital Multimedia Broadcasting) or S-DMB (Satellite Digital Multimedia Broadcasting). You’ll also probably be quite happy with the mobile TV service you’re currently receiving, as DMB has been broadcast over there for some time now.  In Europe, however, it’s somewhat different.  DVB-H is the standard adopted by Europe, but that hasn’t stopped BT and Virgin Mobile in the UK from testing (another!) competing standard, DAB.
In practice, of course, if you buy a mobile TV phone subsidized by a mobile phone manufacturer, it will of course work with whatever service they’re offering.  Just be aware of the limitations of 3G mobile TV, and choose the appropriate service based on the channels you want to watch.  But if you want to a buy a mobile TV phone without buying a network contract, you need to choose carefully, for if the operators in your area don’t support the mobile TV standard of your phone, you won’t be watching anything!
As 2006 progresses, both the mobile TV phones and the network operators’ mobile TV services will be announced. Keep reading MobileMentalism to keep up to date with which operator and which handset it supporting which service.
[Source: The Sunday Times]