Steve Jobs, Apple Founder and Chairman, has passed away at the age of just 56. That his death happened so soon after the Apple “Let’s Talk iPhone” event yesterday is quite poignant, as if he waited just long enough to watch the transition of Apple from his stewardship to Tim Cook’s.

Apple’s event yesterday left many disappointed, but looking back at it, the first 50 minutes of waffle wasn’t just about a company’s achievements, it was about Steve’s achievements, and so can be seen as a memorial and a thank you to a man described by President Obama, no less, as being “…among the greatest of American innovators.” 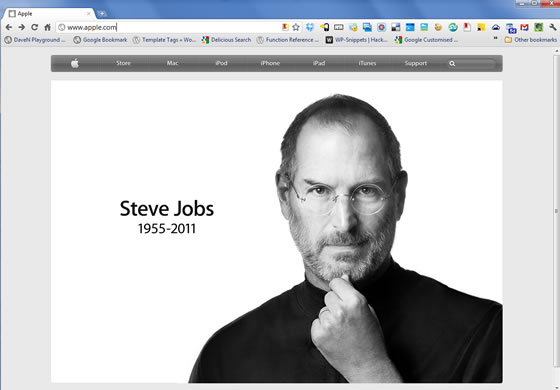 Perhaps this is why yesterday’s event was so downbeat compared to previous ones – it must have been hard for those presenting to maintain the enthusiastic energetic zeal needed to launch a new product while knowing that Steve was in such bad shape.

Apple’s Website shows nothing but an image of Steve in better times, and the tech press and the wider media are reporting both his death and the impact he had on the world, which is almost unheard of for the CEO of any company, let alone a tech company. Such was the influence Steve had on societies across the world.

Perhaps the best words are from Apple itself, which has published the following on its site:

[quote]”Apple has lost a visionary and creative genius, and the world has lost an amazing human being. Those of us who have been fortunate enough to know and work with Steve have lost a dear friend and an inspiring mentor. Steve leaves behind a company that only he could have built, and his spirit will forever be the foundation of Apple.”[/quote]

RIP Steve – you were, without question, the best in your field by a country mile.