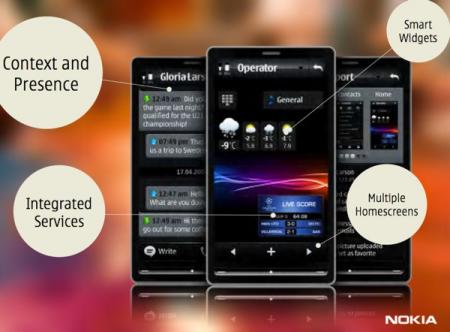 Where would we be without leaked pictures?! This time, we have some leaked pics from none other than Nokia themselves, seemingly showing a new touchscreen user interface for an as yet unnamed mobile phone. The pictures come from a slide presented at Nokia’s Capital Markets Day 2008, so as it comes from the company itself, the pic itself is genuine. Quite whether the phone it depicts is real or just a Photoshop teaser is another matter, though.

If nothing else, though, it shows the direction Nokia are working towards. Full touchscreen phone, context and presence, integrated services, multiple homescreens. Seems that direction has “iPhone” written on it in super-huge letters!