You already knew Nokia was pretty serious about the cameras on its smartphones, right? The Lumia 1020 is currently the best camera smartphone on the market, with its 41 megapixel resolution, Carl Zeiss optics and large camera sensor.

But now the company is really showing off its camera chops with a new RAW image mode that will be available for its Lumia 1020 and 1520 high-end flagship devices.

And if that wasn’t enough for you, they’ve also added a new Nokia Refocus feature, which, as the name suggests, lets you refocus a photo after it was taken (just like the Lytro camera, but without special hardware). 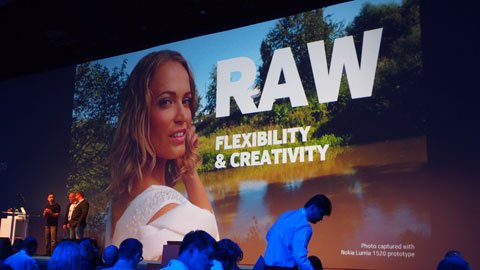 If you’ve never heard of RAW, think of it as the native image format before any image enhancement algorithm or even any image compression format has been added to it. What you get is just the pure pixels that the camera sensor sees.

Why is this good? Well how many times have you read a review of the camera on a smartphone that mentions how the image ‘enhancement’ software makes the colours look overly-saturated, too blue or too yellow? (You haven’t? Just check out a review of the Sony Xperia Z1!).

The reason for this is that the image enhancement software is using an algorithm that’s making its best guess as to how the image should be – and inevitably failing!

It’s difficult to correct for, too, as the original image has been replaced with the ‘enhanced’ image.

But with the RAW format, you’ve got the original pixels in all their unenhanced glory, letting you (OK, Photoshop!) manipulate them to your heart’s content.

OK, so not many people will take advantage of this, but for photographers it’ll be useful, and it’s really good to see more pro-level camera features making their way to smartphones.

As for the Nokia Refocus feature, it’s a really cool way of sharpening your photos if you accidentally focused on the background. It’s also a neat trick for all your pics in a general, although it can get a little boring quite quickly.

That aside, it shows Nokia is still innovating, even after being swallowed by Microsoft. Nokia has definitely laid down the camera gauntlet this year. Now, which of the big smartphone manufacturers wants to pick it up?!