So Google have finally revealed the Nexus One in all its glory. They billed it as a superphone, which is really stirring the hype pot. Question is, is it worthy of the title?

With the Motorola Droid already on sale, and a plethora of other superb phones on the market (not the least of which is the iPhone 3G S, of course), is the NexusOne really any better?

Well, it’s early days, but it genuinely seems like the Nexus One could be worth of the hype. Find out why after the jump… 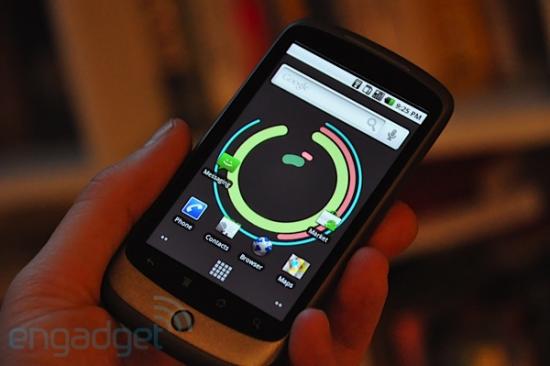 Google Nexus One in glorious technicolour

Before I start with the 10 remarkable features, the pics below really don’t do the Nexus One justice. So check out the official video first, and then read all about what makes the Nexus One a true superphone.

10 remarkable features of the Nexus One

The Nexus One comes with a brand new 3D framework, which not only powers a new gallery app, it’s also used extensively in new user interface tweaks.

Google have shoe-horned Google Earth into the Nexus One! If you’re used to Google Maps on your phone, then Google Earth will blow you away! You get the same smooth rendering of the world as you do on the desktop version, including 3D navigation, terrain views and superb renderings. 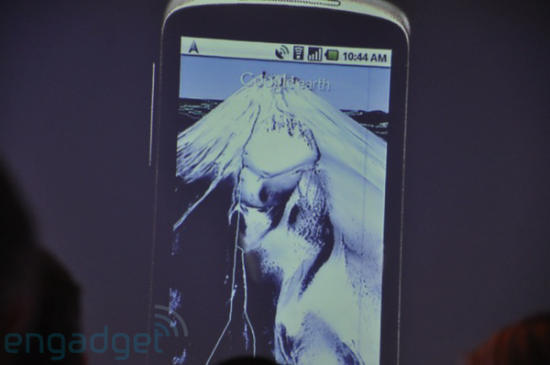 Perhaps the most overlooked feature, but which could potentially be a huge game changer, is voice recognition. This has been a technology that’s traditionally been error-prone, and error-prone text input is not what you need. Consequently, it’s never been widely adopted.

The accuracy of Google’s voice recognition is yet to be established, but it worked flawlessly at their demo today, and Google are making a big deal of how it drives the phone.

Indeed, they showed off a demo of using Google Earth to navigate across a mountain range, with the user using voice to search for different points of interest. It’s this ability to perform voice recognition while doing other things, and making voice a pervasive way of interacting with your phone, that could potentially change the way we use our phones in the future.

But only if it works! 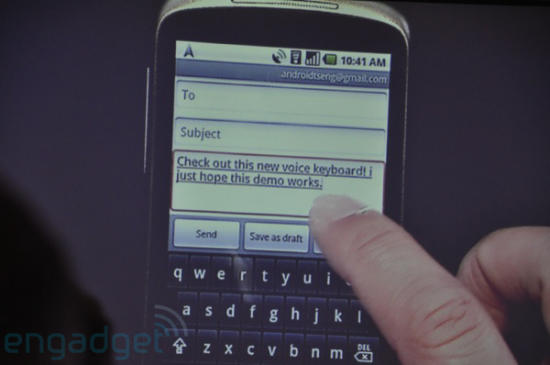 Google might have a better chance of making this technology work where others have failed because all the processing is done on their servers.

This fact alone is pretty incredible – voice recognition is a processor-intensive application, so to do it on their servers with potentially tens of thousands of people using it at once gives a glimpse of just how much processing power Google now commands.

The advantage of doing it on the servers though is that they can capture the voice of those tens of thousands of users and use it to train their algorithm in a way no other algorithm has been able to.

The wallpaper on the Nexus One is what Google terms ‘live’. What this means is that it responds to your touch. Simple examples show a watery bakground ripplinig as you run your finger over it. Although only a gimmick at the moment, there are doubtless plenty of app developers who can already see plenty of potential for developing this further. 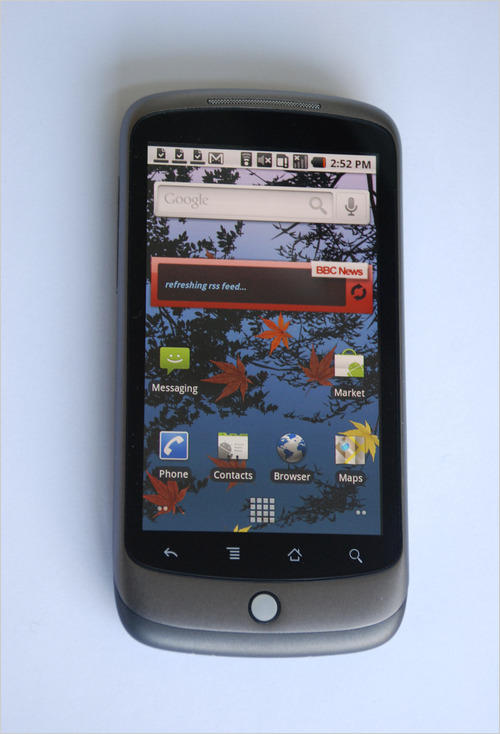 5). Auto sync your photos with Picasa

Another great feature is that the Nexus One will automatically sync your photos with Picasa, tagging them by date, time and location.

This means you can take a picture, and it’ll be instantly uploaded to Picasa, from where your friends or family (or whoever has access to your Picasa account – the world, if you don’t care about privacy!) can see it instantly.

Not only does this mean you can share your pics with the world, you can also forget about having to upload your pics. Currently, this can be a real pain, as it involves hooking your phone up to your PC (which itself means finding the damn USB cable!), copying the pics over and then uploading them.

Having this done for you automatically will make it much easier for you to access your pics, and on whatever PC or laptop you have to hand.

It also means you don’t have to worry about filling up your SD card, as you can safely delete your pics once they’ve been taken, safe in the knowledge they’re already tucked away in Google’s cloud.

All that extra space can therefore be used purely for tunes or apps.

CoolIris is a stunning free plugin for Firefox, Safari and Internet Explorer that lets you quickly search your PC’s pics, pics on Facebook and Flickr, and even videos on YouTube, in a free flowing 3D wall of media.

It’s stunning to look at and is a great way to easily find the pics you want from thousands.

Google thought it was great, too, so have got CoolIris to power the new gallery app on the Nexus One. So now you can see your pics in an interactive free flowing 3D wall exactly as you can on your desktop browser.

Better still, you can cluster images according to time, date or even location. 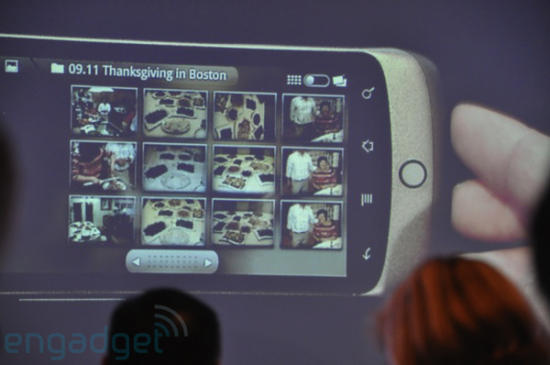 So if you know the location of your mate’s house, you can find all photos that you took at his parties over the years. Powerful stuff!

You can also use the accelerometer to search through your pics. Tilt the Nexus One to the left of right, and the 3D wall of pics will respond instantly, shifting the moving wall of pics right and left in respone. All very intuitive!

As for the camera, it’s 5 megapixels and is much better than the camera found on other Android phones. In particular, its macro and low light modes are excellent, letting you take great shots indoors.

The Nexus One contains what can be thought of as a mobile newspaper, via a widget on the bottom of the homescreen (or wherever you want to put it) showing the latest news headlines and local weather. Click on the headline, and you can see the full story in a special news app, which also features tabs for weather and news stories by category (such as Entertainment or Sport).

It’s ironic given the disagreements News International has had with Google, but the News feature on the Nexus One would be something I’d use almost compulsively!

The Nexus One comes with Google Navigation, the company’s turn by turn Sat-Nav app that’s currently terrifying the likes of Tomtom and Garmin. When combined with the power of then 1GHz Snapdragon process, though, Google Navigation really comes into its own.

The Nexus One has a much more refined user interface than Android phones of old. Not only has it been polished in places, it’s also been given a much more animated feel, with icons zooming in and out and beautiful transitions adding to the overall polish.

With Snapdragon powering the device, the interface is also super-fast as well, responding to your every movement instantly. 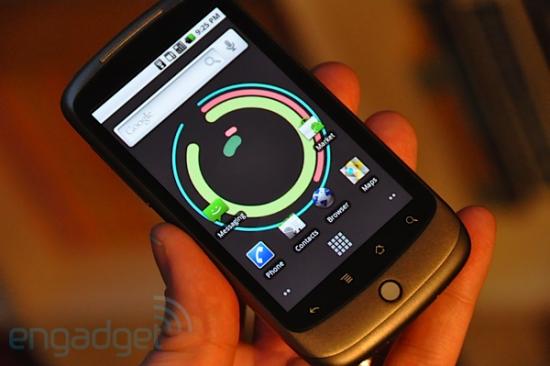 10). The Google Web Store – a brand new way to buy a mobile phone

Finally, Google have disrupted the mobie phone market by finally breaking the locked-in model that most mobile operators (certainly in the US) have adopted.

This is the model where you can only buy a phone on one operator’s network. So if you’re with T-Mobile, for example, you can’t buy an iPhone, as that’s exclusive to AT&T.

This model reduces choice for the user and slows innovation, as users aren’t free to move networks if a competing network offers a more advanced phone.

Google has changed this with the Google Web Store, a Web site from which you can purchase a new Android phone – from any operator.

The Nexus One, for example, is available for T-Mobile at the moment, and will be on offer via Verizon and Vodafone in Spring 2010. Other operators will be on board thoughout 2010, so if none of these suit you, you’ll soon be able to choose whatever operator you want.

Or simply buy it completely unlocked. Now. And I do mean now – it’s on sale already!

So not only is the Nexus One a fantastic new phone in its own right, it could potentially disrupt the entire mobile phone sector, at least as far as the operators are concerned.

It really hammers home the difference between Apple’s approach and Google’s as well. Not only does Apple tie its iPhones to specific operators it also locks down the App Store, effectively censoring apps that it deems not worthy of its phone for seemingly arbitrary reasons.

In contrast, Android has always been open as a platform, and the new Google Web Store even makes your choice of operator completely open.

It’s not just for the Nexus One, either. You can already buy a Motorola Droid through it, and more devices, operators and supported countries will be sold through it as the year progresses.

Google’s aim is to be a one stop shop for Android phones, regardless of the operator you want to use. Effectively, they’re cutting out the middle man, which I’m guessing won’t exactly please the likes of Carphone Warehouse! 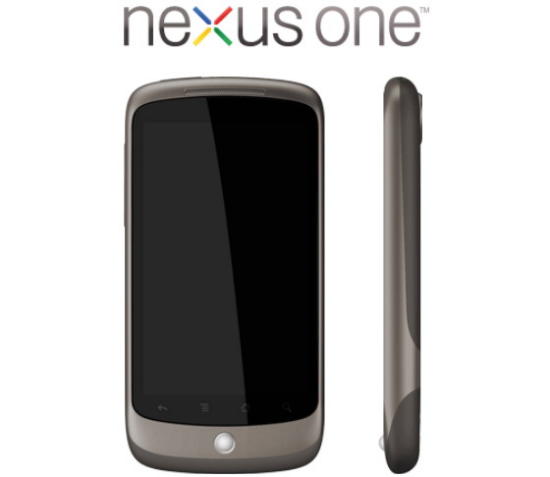 It’s only just been announced but already the Google Nexus One is receiving glowing headlines, and is threatening to overshadow CES 2010, which starts on Thursday.

Perhaps the most glowing comes from TechCrunch’s Michael Arrington:

It’s Google’s vision of the perfect Android device, from the huge and beautiful screen and massively fast Snapdragon processor to the software elegance of Google Navigation, Live Wallpaper and the Voice Keyboard. When combined with Google Voice there is no phone on the market today that can touch the Nexus One.

Unlike previous Android phones, and I’ve used most of them, the Nexus One has no obvious flaws or compromises. The phone is the state of the art in mobile, and I will use it happily.

High praise iindeed! If this is an example of the phones we can look forward to through 2010, just imagine what we’ll be using at the end of the decade!