Worried that Samsung is being left behind in the crazy race to bring dual-core smartphones to the masses? Well, worry no more, as we have evidence that the company is planning on announcing the new dual-core Samsung Galaxy S2 and Samsung Galaxy Tab2 at MWC 2011 in a couple of weeks time.

The Galaxy S2 should be a monster, with a 4.3″ Super AMOLED Plus screen, dual-core CPU, 8 megapixel camera with flash, full HD 1080p video recording, and Android Gingerbread 2.3.

That’s an extremely impressive feature list, and one that should five the dual-core-sporting LG Optimus 2X and Motorola Atrix a run for their money. 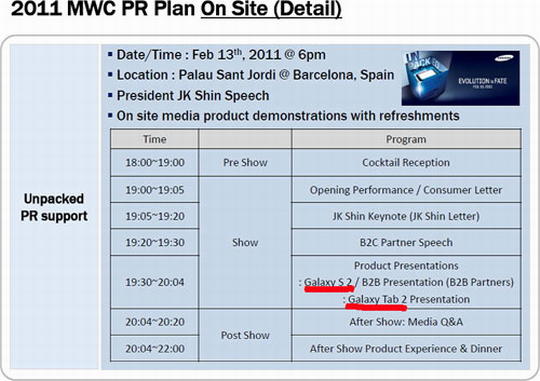 The Samsung Galaxy Tab2, meanwhile, will presumably offer similar specs to the Galaxy S2, but in a tablet format (no idea what size, but we can assume 7″, the same as the current Galaxy Tab).

Samsung has had outstanding success with its Galaxy range of high-end Android devices, selling over 10 million Galaxy S’s and 2 million Galaxy Tabs. The new Galaxies look every bit as tasty as their predecessors, and so should sell equally well.

More news on the new Galaxys should com eon February 13th, when Samsung will officially present them.