Japanese phones used to be 2 years ahead of Europe and the US.

Then came the iPhone, which instantly made Japanese phones look cumbersome and irrelevant, and they’ve fallen increasingly behind ever since.

With their silly flip form factors that are relics of a by-gone era of keypads, Japanese phones are identi-kit clones that are stuggling to catch up with the seismic shift to touch that the mobile world has embraced.

Until now, that is. Time never stands still in the mobile world, and Japanese phones could once again be pointing the way to the future of our own smartphones. 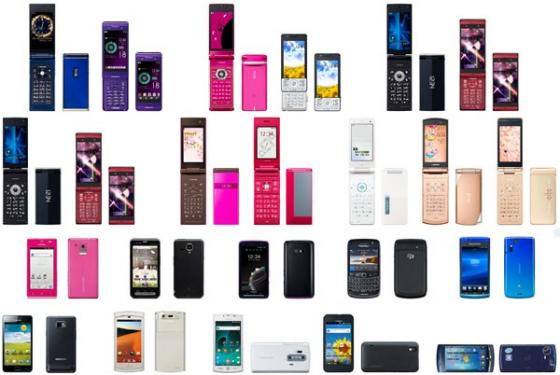 Remember the days of the feature phone?

Japanese phones, like Korean phones, have always focused firmly on features. Whereas Nokia leads the megapixel race in Western markets with the 12 megapixel N8, Japanes phones have had 12 megapixels for a while now. Mobile TV has been standard across Japan for a number of years, too, and Sony Ericsson has had a Bravia mobile TV phone for Japanese markets since 2007 at least.

The rise of software

All of these features sound a bit out of date, though. Everybody knows that mobile phones differentiate themselves now by their software. Its Android vs iPhone, with Symbian on its death bed and Microsoft prepared to spend billions to stop Windows Phone 7 succumbing to the same fate.

But what happens when every phone on the planet has Android? How do the manufacturers differentiate their products then? Features of course. And that’s exactly what’s happening in the Japanese market, as a plethora of new Android phones has just been announced by NTT DoCoMo, each of which has no choice but to differentiate itself from its competitors by a fancy new feature.

Its these features that will very quickly make their way to Western smartphones, so if you want a glimpse of the future of smartphones, check out the latest Japanse phones below.

The latest state of the art Japanese phones

So what are the new features on the latest Japanese smartphones? How about these for starters:

It’s interesting to note that these features aren’t 2 years ahead of European and US-specced phones, but rather 6 months at the most. And even then, that’s simply because the megapixel race in Western markets has quietened down, with our tastes more attuned to the user interface (i.e. software) than to the features of the phone (i.e. hardware).

In other words, the phone technologies of Japan and the West have now equalized, with the key differences being market taste rather than technological leadership.

Europe in danger of being squeezed out

With all of NTT DoCoMo’s latest phones using Android, it’s fascinating how the software of the US is influencing the operation of the phones of Eastern manufacturers, while the hardware prowess of the Eastern manufacturers, such as Sony, Panasonic, Sharp, HTC and Samsung, is making its way to Western markets.

Worryingly, though, one major market is being completely left out by this technology transfer: Europe, with Nokia now the last remaining major European manufacturer, and which is now no longer competing effectively, being outgunned by hardware and giving up on software.

Has Europe been squeezed out of the mobile market for good? My guess: an unfortunate yes.