Sony Ericsson has just announced the Sony Ericsson Xperia Active, a new waterproof Android phone that fits a very specific niche – sporty people! As its name implies, the Xperia Active is a rugged phone designed for active use and sports people. Think running, clubbing, Glastonbury or days on the beach and you won’t be far wrong. Thing chubbers and couch potatoes and you will be!

To help it cope with an active lifestyle, the Xperia Active is Sony Ericsson’s first waterproof Android phone, even coming with technology that lets you use its touchscreen with wet fingers, something that would ordinarily kill any other touchscreen. The Xperia Active doesn’t even flinch, though, and can easily survive being immersed in water (although it’s not recommended for swimming).

That’s not the only novel technology sported by the Xperia Active, though. 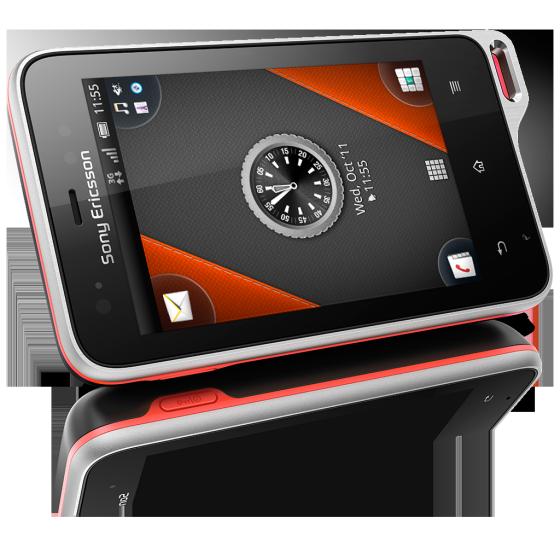 Connect the Xperia Active to you with ANT+

Combined with a built-in sports app called iMyMapFitness, which lets you connect seamlessly to these devices and track your performance over time, the Xperia Active has the potential to become an integral part of your daily fitness routine.

As well as the sporty functionality, Sony Ericsson has also given a lot of thought to the way in which the Xperia Active will be used when on the go. In the box, the Active comes complete with a sturdy wrist strap, arm holder for strapping it to your arm and an ear clamp for clamping your Bluetooth headphones to your ear so they don’t fall off.

Is the Xperia Active really a waterproof phone?

The Xperia Active also comes with two backplates (one white, one white black), so you can change the look of your phone whenever you feel like it. This surprised me, though, as did the microSD slot, as you’d think a waterproof Android phone would need to be sealed, but apparently Sony Ericsson has managed to seal the important electronics while still letting you snap the back cover on and off as often as you like.

Indeed, Sony Ericsson is very keen to show off the waterproof nature of the Xperia Active, as you can see from its somewhat cringeworthy video below.

How good is the Xperia Active as a phone?

The phone itself also looks rather good. It features the same cut-down user interface as the Sony Ericsson Xperia Mini, with the corner buttons giving you quick access to key features without needing acres of screen real estate.

Which is a good job, as the Xperia Active doesn’t have acres of screen real estate! Instead, it has a 3″ screen, which although makes it a small smartphone, it actually means it’s ideal for doing anything sporty with, as the last thing you want when jogging is to be weighed down by a leviathan of a phone strapped to your arm!

Don’t think the Xperia Active skimps on features, though. Although its screen is small, it still uses the same Mobile BRAVIA display technology as the Xperia Arc, while the 5 megapixel camera can also shoot video in 720p HD.

Powering the Xperia Active is the ubiquitous 1GHz Snapdragon chip, which, given the size of this phone, should mean the interface absolutely flies.

There’s Android Gingerbread 2.3 running things behind the scenes, and a tonne of other features too numerous to list (but you can see them all from Sony Ericsson’s site).

The Xperia Active focuses on a very specific niche and would seem to do it very well, and is a breath of fresh air from some of the other mid-range Android phones that don’t offer anything different from the competition.

It’s a rugged, waterproof Android phone, and there aren’t too many of those around at the moment, much less ones that look this good, and the use of ANT+ is a significant added extra if you’ve got the extra equipment to use with it. We’ll know more about how well it lives up to its promise soon, as the Xperia Active release date is set for Q3 2011.

If you’re a fitness fanatic, this could be one new phone that could well be on your Christmas list.