Here’s something we’ll all be hearing a lot more about real soon – mobile TV. I’ve always thought TV on your mobile made perfect sense. I mean, interactivity’s all very well and good, and cramming gadget-fest features like cameras and MP3 players into your phone is great, but what you really want to do when you’ve a few minutes to kill is to sit down and watch the telly! And I don’t mean poor video-clips of Big Brother or a 10 second clip of a goal being scored, either. I mean proper telly. And, thanks to the mobile phone operators, handset device manufacturers, network operators, broadcast engineers and content providers (phew!), it looks like our wishes are about to be granted – very very soon.

The User vs Operator Dilemma
Mobile TV has been possible for some time now, and talked about endlessly, but the problem in the past has been cost – streaming media requires big bytes, and packet-based systems such as GPRS mean the operators can charge per byte. Thus, streaming TV and video clips to a handset is horrifically expensive. This cost has been one of the reasons why new multi-media 3G services simply haven’t been adopted on a wide scale.

But not everything has to be pushed through the mobile spectrum. TV already has its own distribution channels, which are broadcast (so no capcity issues), and don’t require the user to pay per byte. The problem is, of course, providing a mobile with a TV receiver means the network operators are cut out of the loop. Their network is not actually being used – only the TV network and the mobile phone itself. So if your network isn’t being used, you can’t charge for it. This has left the mobile phone manufacturers with a dilemma. Users really want mobile TV, but network operators don’t. Now, at last, it looks like a solution has been reached, and we’re heading for the glorious world of always-on, always-with-us TV.

Resolving the User vs. Operator dilemma 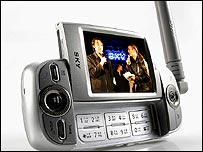 The solution to the user vs. operator dilemma comes in the form of interactive services. Nokia, for example, have recently announced a pilot scheme in the Dutch capital, The Hague, in which Nokia 7710 smartphones are being used to test the technical and commercial aspects of broadcast mobile TV using the DVB-H standard. Apparently, “an important part of the study will consist of evaluating the opportunities for interactive services made possible by combining a broadcast service with a mobile network.” This is interesting – combining the broadcast capabilities of TV with the interactivity of mobile phones. In other words, the user gets the TV programmes they want, and the operator’s network is used via the interactive component of the service (think ‘Press the Red Button now’ set-top box-type service). It doesn’t matter whether the operator charges per byte or for access to the service – the fact is, they can start charging for the service, because their network is now being used, and there is a service they can actually provide. And according to Nokia, we’d all be happy shelling out 10 Euros a month for the service (would we?…yeah, ok, I would! It’s about the only service currently provided that I’d be prepared to pay for, which is what the networks want to hear).

So, is this the best of both worlds? The operators certainly think so. If there’s one thing that’ll drive people to stare at their phones and use its services more than current they currently do, it’s porn…er, and TV! But what can we users expect?

What to watch on your Mobile TV

Well recently in the UK, Sky teamed up with NTL, Nokia and O2 in a trial that provided Sky News, CNN, Cartoon Network and Discovery programmes to Nokia 7710s. Orange is going the 3G route, offering TV on its 3G network using Nokia’s boring-looking 6680 handset (left). Customers can download the application for free and will then be charged Â£10 per month for about 20 hours of viewing time of ITN News, CNN, Comedy Time, Cartoon Network, Toon World, Fashion TV and Extreme Sports. Special channels have also been developed for reality shows Big Brother and Celebrity Love Island. Orange is already offering 23 TV channels over mobile phones in France (source: WotSat) . 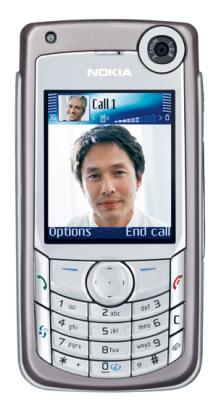 Meanwhile, O2 is testing a competing network technology called DVB-H in Oxford. 3G, although offering fast downloads, still only has finite capacity – if everyone tuned into the same TV show, the network would be overwhelmed. In contrast, DVB-H is a broadcasting standard for handheld devices, and so has no network capacity issues – but it does require a new network to operate.

Mobile TV Format Wars
You may suspect that there’s a format war brewing here, with different operators testing different systems. And you’d be right, too. It’s not confined to DVB-H and 3G, either. Virgin Mobile has partnered with BT in a trial providing mobile TV over DAB (Digital Audio Broadcast). BT has upgraded transmitters to ensure the service works in buildings but in theory its mobile TV will work wherever there is a digital radio signal (source: The Guardian). Finally, in South Korea, yet another format exists in the form of the Digital Multimedia Broadcasting (DMB) standard. Originally developed in Korea, DMB is based on the digital audio broadcasting (DAB) standard, but can deliver video, pictures and data alongside audio (source: The BBC). Which format will win out is anyone’s guess.

One way in which users will most certainly win is in the design of new mobile devices. The majority of current UK trials revolve around a modified Nokia 7710 (above), which offers some superb features, such as:

However, it’s big, and I’m not sure how well it works as an actual phone – just imagine sticking it to your ear and shouting “Hello!” into it! 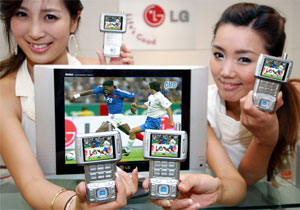 Mobile TV doesn’t need a huge handset, though. LG, for example, have just launched a glorious-looking TV phone in South Korea that’s equipped with DMB and 3G support. No use over here in the UK, of course, as we have no DMB service in commercial operation, but this is certainly the style of device we can expect, possibly as soon as next year. And LG seem to have the sound issue licked as well. It’s one thing having mobile TV, but you don’t want to annoy people with its sound. Not a problem, with earphones that also double as TV antenna.

So it looks as though Mobile TV really will be with us in the very near future. Personally, I can’t wait, as this is one service I genuinely would want to use (rather than all the others that have tempted me with gadget lust, but have proven to be hardly used at all). The future’s bright – the future’s telly!!