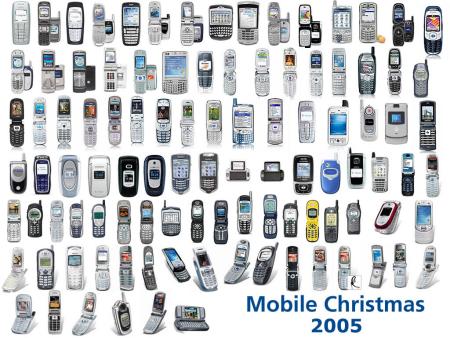 Pictured above is a neat montage of all mobile phones that are available in the US for Christmas 2005.  The picture is a montage made by Russell Beattie, who also gives a neat run down of the state of the US market. From a European’s perspective, this makes for interesting reading. Key points include:
This is a revealing insight into the differences between the US and European markets.  According to some of the comments on Russell’s page, US consumers focus more on the plan being offered than the phone that comes with. As long as the deal’s right, they’ll accept whatever phone comes with it.  Maybe this is because the US consumer has traditionally been very focused on the deal? I’m also surprised that the US doesn’t have mobile phone shops that sell, er, just mobile phones. You can’t move for them in the UK!
Whatever the reasons, I’d argue the US market is behind the European market (and both markets are considerably behind the Asian market). Should make for an interesting 2006 though.
[Source: RussellBeattie]