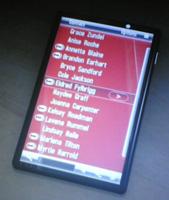 More Google Phone rumours are coming, with reports that High Tech Computer (HTC) is now manufacturing the Google phone, and expect to ship it late 2007. The reports come from “handset component makers” via DigiTimes, who claim the Google phone will support Texas Instruments’ 3G platform and EDGE, and will feature mobile versions of Google’s GMail and Search (naturally).

According to DigiTimes, “Industry watchers expect Google will first partner with European telecom provider Orange for the launch of the handset”, which leads me to think a note of caution needs to be added to these reports…

As EngadgetMobile states, “Digitimes doesn’t have the best track record with rumours”, and the fact that the new “Google Phone” is destined for Orange makes me wonder whether it’s the fabled Google Phone we’ve all been thinking of, or whether it’s just another Orange smartphone bundled with a few Google apps.

HTC already make Orange’s existing range of SPV smartphones, all of which are based on Windows Mobile, and so releasing another Orange SPV smartphone is to be expected. Bolting a few Google apps onto the phone, and maybe even co-branding it as the Orange Google SPV (or whatever) would make perfect sense, but it does not make such a phone the legendary Google phone, any more than the original Motorola ROKR’s use of Apple’s iTunes made it an Apple iPhone.

So my guess is that HTC are working on a new Orange SPV smartphone that will come with mobile Google apps pre-installed, and which may or may not come with Google branding – but it will not be the “Google phone” that everyone’s been working themselves up about (and which is expected to look like the pic above). Besides, I still think the Google mobile browser makes far more sense than a Google phone anyway.