Fresh from their recent success with Android smartphones, Motorola have found a renewed confidence and are working on fresh mobile phone designs that can only be described as, er, bold!

One such design in this, the Motorola Motosplit, which as its name suggests, contains a split keyboard sandwiching the main screen of the phone.

It’s an odd design and one that was tried (unsuccessfully) by Nokia some years ago with the Nokia 6820. The reason it never worked then is because: 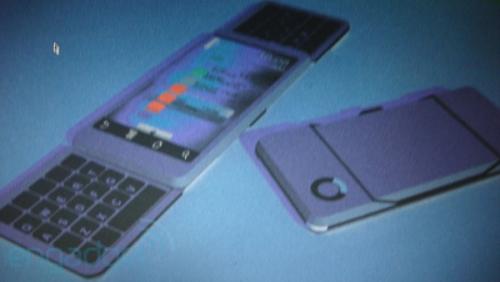 a). it’s awkward to hold
b). it’s only useful when the phone’s placed on a flat surface
c). there are other form factors that work much better (like the Motorola Droid, for instance!)
d). You look like a berk when using it!

And the reason is won’t work now is because…well, the same reasons still apply!

As it happens, I’m calling this one out as a fake. The pic’s too blurred, the specs are too suspiciously good (“Android 2.0”, “Snapdragon CPU”, etc.), and the concept too daft for it to be real!

Unless, that is, it’s really the new Apple tablet (gasp!)

Sorry, promised myself I wouldn’t mention it, but couldn’t help myself!