If this year’s craze of dual-core processors powering your smartphones and tablet isn’t enough for you, NVIDIA has somethng that migh just satisfy you – at least for a few hours! It’s the brand new NVIDIA Kal-El quad-core chip that adds stunning performance and reduced battery draing.

NVIDIA claims the Kal-El can download and display Web pages twice as fast as the Tega2 (which is already nearly-instantaneous), with all four of its cores involved in displaying the Web pages.

But this is just the start. Kal-El is between two an five times as fast as the Tegra2, and faster than an Intel Core2Duo(T7200) chip meant for desktops. But Kal-El is being shipped this year. Just wait till you see what NVIDIA has in store for us by 2013.

You might want to sit down before you read this! 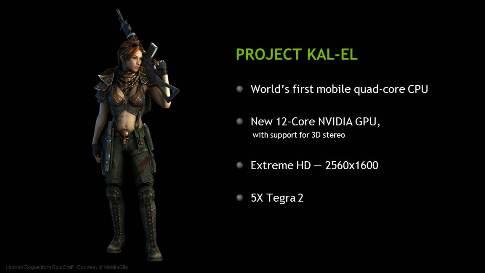 It’s not just super-fast performance that’s on offer with Kal-El. It’s got some mighty multimedia chops as well. Take for example, video capture and playback. The Tegra2 that features so strongly in this year’s crop of smartphones and tablets can support full HD 1080p video. Kal-El? 1440p. That’s higher resolution even than your HDTV, bringing what’s known as Extreme HD to your tablets equipped with a 10.1″ display with 300dpi.

But surely, you’re thinking, this is all part of the distant future? Well, yes, but the future is never as far away as you think. What you see in the video below is Kal-El being demoed. In other words, this chip is real, it’s here now, and NVIDIA’s customers are planning to put it into large scale production in August 2011.

That means you can expect to see quad-core Kal-El-powered phones and tablets at CES 2012!

But CES 2012 is hardly the distant future. It’s not even a year away! What else has NVIDIA in store for us further down the line?

Three new processors coming out at a rate of one a year over the next three years, that’s what. Kal-El will be released in 2011, promising twice the performance of the Tegra2. After that comes Wayne, Logan and Stark, each a new generation of chip, released exactly a year after the previous generation.

So by the time we reach Stark in 2014, we’re talking about a chip that’s 75 times faster than the Tegra2! That’s almost undreamed of performance for a desktop, let alone a smartphone or tablet. 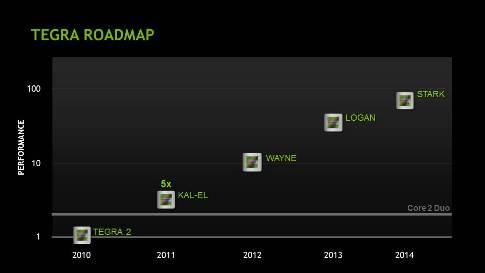 If you thought the future had already arrived with this year’s crop of dual-core smartphones, you can t hink again – the future really has only just arrived, and smartphones with 75 times the performance of today’s devices will be able to do things we’ve never even dreamed of!

And I’ll be there reporting on all them all as they happen!