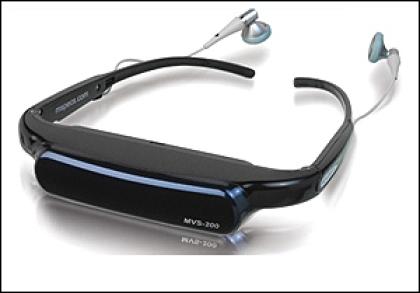 When Motorola teamed with Oakley to produce its awkward-looking mobile-music-shades, which attempted to merge the mobile phone with sunglasses, it forgot one crucial component – the display. Now Korean start-up Kowon Technology aims to rectify that with its new product, the niftily-titled MSP-209 “Video Glasses”.

The Video Glasses contain a pair of LCD screens that are roughly the size of a human pupil (4.2mm x by 4.8mm), but give the effect, apparently, of watching a 32″ TV from two metres away. Kowon aims to capitalize on the surge in mobile TV phones by letting users plug the video glasses into their DMB-equipped phones.


Wearing the glasses all the time would mean your only respite from TV would be when you blink. Whilst coach potatoes across the world would surely rejoice at this, the rest of us might balk at the thought of taking the next step towards Borg-dom. I mean, we’re already welded to our mobile phone technology, carrying them with us wherever go. Permanently wearing video glasses that are plugged into our mobiles means we’d be sleepwalking our way into the Borg collective (or at least the nerd hall of shame)!

Fortunately, Kowon’s aims are slightly different. They’re pitching these glasses at people who don’t want other people around them seeing what they’re watching.

“People will be able to enjoy movie clips or real-time broadcasting with our merchandise wherever they go without being bothered by their neighbors,” said Kowon vice president Park Hong-tae.

Although I can see the benefits of such a heads-up-display-type device, I can’t see it catching on, as it looks so damned geeky. Orange tried something similar with a video glasses add-on for the Samsung D600E, but this was just a gimmick. That’s not going to stop Kowon, though, who are releasing the video glasses first in Korea (naturally!), and will then seek to expand into European, Japanese and Chinese markets. No plans for a US release yet, but I can’t see that upsetting too many people!

Dual Core NVIDIA Tegra2 chip even faster than the Snapdragon