Remember the start of 2010 when everyone got all excited with the Nexus One and the HTC Desire? So powerful were those phones, with their Qualcomm 1GHz Snapdragon processor, that Google even started calling them Superphones.

But what about 2011? With phones already having the power of laptops from just a few years ago, what can we expect from next year’s superphones?

Qualcomm may have the answer. The maker of the Snapdragon has just revealed more details on its next generation of smartphone chips, which should give us an insight into the power of 2011’s smartphones. And it is, I promise you, mouth-watering! 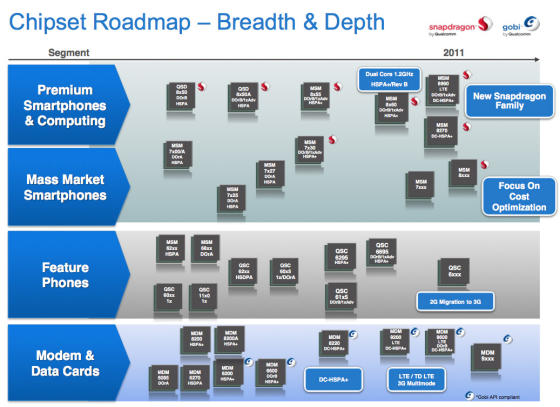 2011 is all about dual core – two processors inside your phone, each working on it own task in parallel with the other, theoretically doubling the performance. The clock speed will grow as well, moving up from 1GHz to 1.2GHz and beyond. With the addition of other architectural tweaks, 2011’s Snapdragon, the MSM8960, will be five times faster than the original Desire HD.

Five times faster! Even more impressively, it’ll only consume 75% of the power that the Desire consumes, so you can do more, more quickly, with less battery.

Broadband smartphones even faster than your desktop

The good news doesn’t end there though. Qualcomm’s chips also offer built-in radios that connect with numerous different network technologies. For 2011, that means its Snapdragons will come with WLAN, GPS, Bluetooth, FM radio, 3G and 4G (LTE) all built in.

4G is the most impressive of this list, as it’s theoretically capable of some stunning speeds. With most mobile operators now rushing to upgrade their networks to be 4G compatible, the phones of 2011 should be able to download data at anywhere between 5 – 12Mbps (depending on how crowded the network is), and up to a theoretical 45MBps.

Smartphones with the power of the PS3

As a final bit of jaw-droppingness, Qualcomm also manufactures the Adreno GPU (graphics processor), which is also used in top-end smartphones. In 2007 – 2008, the Adreno 130 meant that phones such as the Nokia N-Gage had the same graphical performance ability of the Nintendo DS. By 2009, the Adreno 2xx chip had given phones such as the iPhone 3GS the same graphical performance as the Nintendo Wii. 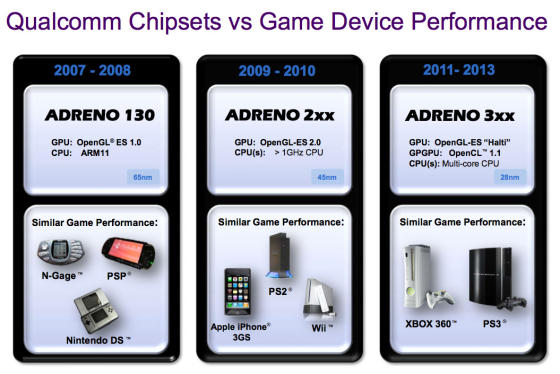 Next year, the Adreno 3xx will have the same graphical performance as the XBox360 and PS3!

Imagine the quality of the games you’ll be able to play. Angry Pigs as a 3D HD First Person Shooter is surely only just around the corner!

Putting all that together, this is what the phone of 2011 will have:

Ah, the dilemma we all face! With phones this good just around the corner, should you wait, or buy a new phone now? It’s the dilemma I’m in, as I’ve just ordered an HTC Desire HD, and am now wondering whether to wait or not.

And although many phones will be released next year with dual cores, the specs you see above won’t realistically come out until the end of 2011.

So take it from me, don’t wait – buy a new phone now, and then buy an even better one in 18 short months’ time! The alternative is to put it off eternally, and end up with a really old battered looking phone that even its mother couldn’t love (OK, that’s not true, I still love my old G1!) – and that’s no good for anyone!