And that’s not all. NVIDIA, the company behind the Tegra family of mobile super-chips that are currently powering the new generation of dual-core superphones that will be released from next month, has also got another new chip set to be released in a month or so’s time. 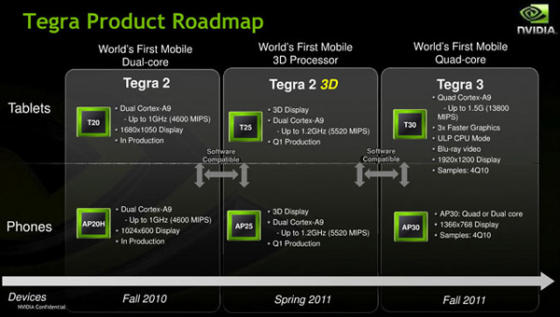 This new chip is the Tegra2 3D, which, as its name suggests, is capable of rendering a 3D display, as well as being 25% faster than the existing Tegra2 chip.

NVIDIA have really started to apply the heat on their competitors this year with a seriously aggressive pace of innovation. From the first dual core chips running at 1GHz in the early part of the year through to 1.5GHz quad-core chips with 3x faster graphics at the end of the year, they’re going to take some beating!

Now what can we do with a mobile phone with a 1.5GHz quad-core tablet inside?!…

Dual Core NVIDIA Tegra2 chip even faster than the Snapdragon