Forgive the continued teccie-ness, but straight after posting about the new dual-core Snapdragon chip promised for the end of 2010 comes news of NVIDIA’s new next-gen Tegra2 chip for smartphones, which blows the Snapdragon clean out the water!

Qualcomm’s next gen Snapdragon will be dual core and run at speeds of 1.5GHz. NVIDIA’s nexyt gen Tegra2 will also be dual-core, but although it only runs at 1GHz, it contains no less than eight independent processors, each of which is dedicated to tasks such as Web browsing, mobile 3D gaming and HD video. 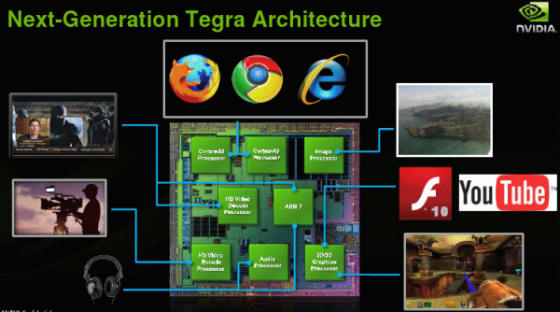 What this gives you is a smartphone chipset that’s 10 times faster than anything on the market today. And unlike the Qualcomm chips, NVIDIA actually have the Tegra2 in production, and in the hands of gadget developers now!

Expect it to surface on Internet tablets first, followed swiftly by smartphones.

Phew! I think Google’s right. This really is the age of the superphone!