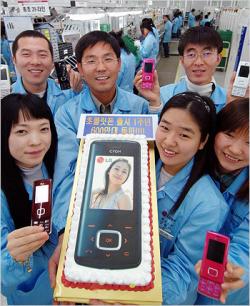 LG have shown that while chocolate might be bad for you, the LG Chocolate is extremely good for a high-tech mobile phone company seeking to turn a loss into a profit.

Celebrating the first year of the launch of the LG Chocolate, the company announced the world consumed 6 million LG Chocolate designer phones in 2006, with 3 million sold in the last two and a half months alone.

Better still, the company predicts sales will reach 10 million in the first half of next year.

Such is the success of the LG Chocolate, it accounts for 18 per cent of LG’s total mobile phone sales, and single-handedly turned a $33 million loss posted by the company in the first quarter of 2006, into a profit.

Success with the mobile phone market is difficult and expensive to come by, but the rewards are more than worth it. And with the glorious looking new LG Shine on its way, LG look set to continue the success currently enjoyed by the Chocolate.