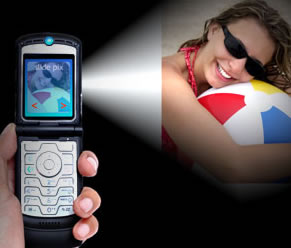 Motorola have announced an agreement with Microvision to develop pico projector display solutions for its future mobile phones.

Microvision’s PicoP technology is an ultra-miniature laser based display engine that can project a mobile phone’s display onto a wall or even a curved surface at WVGA resolutions (854 x 480 color pixels). Projector technology such as this has been around for a few years now in one prototype form or another, but Motorola is the first mobile phone manufacturer to commit to the new technology.

Although the initial agreement sees Motorola working with Microvision on a demonstration unit, it can’t be too long before we see this type of technology become mainstream. As mobile phones become smaller, the screen is the limiting factor, as you need a large screen to see the features the phones are capable of providing.

Web browsing, video playback, Sat-Nav and a myriad other features all need reasonable screen sizes and a good resolution to be truly usable, yet a large screen size necessarily limits the phone’s form factor, and hence its desirability.

As such, projector technology is the perfect solution, as the phone can be made as small as possible – indeed, it doesn’t even need a fully functional screen – while still providing a “big screen” display when projected onto a wall.

The key competitor to projection technology is the foldable screen, which can be rolled up like a scroll when not needed. However, although technology has also been around for some time in prototype form, it’s taking a lot longer for fully commercial displays to become available, and the cos is also prohibitive.

It’s a bold move by Motorola, and one they sorely need to make if they’re to regain their status in the mobile phone world. This month’s sales figures saw Motorola slip from number 2 to number 3 in the mobile phone rankings, with Samsung overtaking them as the world’s second biggest mobile phone company by unit sales.

It seems that Motorola have at last realised that the RAZR is no long sufficient to keep them at the number 2 spot, and that innovation is the only solution. Although their agreement with Microvision won’t lead to a projection-based mobile phone any time soon, it’s a step in the right direction, and sees the company finally making some bold new innovative steps to redress the technological lead it’s surrendered to its competitors.