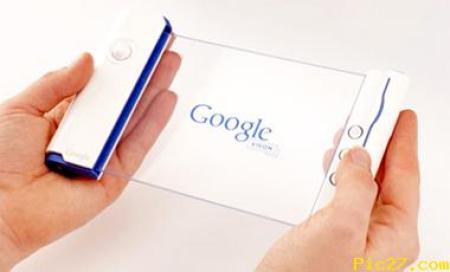 More Google gPhone rumours for you, this time apparently from an ultra reliable source. Mark “Rizzn” Hopkins has spoken to several people inside the mobile phone industry, and has the scoop on what we can expect from the new Google phone.

Full details of the new Google gPhone runours after the jump (and no, it won’t look like the pic!).

According to Hopkins, T-Mobile will be the operator for the gPhone worldwide. Naturally, T-Mobile have responded with a blanket “we don’t comment on rumour”, but then you’d expect them to say that, so it must be true, right?!

Rather than make the gPhone themselves, Google are apparently designing a reference model of a phone, and letting others make it for them, which seems fairly obvious. Building phones is hugely expensive, and Google simply do not have the facilities, nor, one would suspect, the desire to go into the hardware business (unless you call hundreds of thousands of servers situated next to their own hydro-electric dam hardware!)

The reference model specifies that the phone will be based on a completely open source design with a Linux kernel using the Apache licence – in other words, the exact opposite of Apple’s approach with the iPhone, which is so closed ot outside development that any attempt to circumvent its tight controls will turn the desirable iPhone into a useless brick.

HTC will apparently be building the gPhone for Google, which again has been rumoured for some time. One rumour that is new, however, is the price – apparently, the gPhone will sell for $400, which is a bit more than the completely free price that other rumours had speculated upon.

The gPhone will also come with GSM in every market in which it’s sold, but no news on 3G. Hopefully it won’t do an iPhone and launch without 3G, but I’m sceptical – it’s an American phone, and the US doesn’t have anywhere near the 3G penetration as many other countries across the world, so 3G is seen as less of an issue.

Not sure how a Google phone will be able to differentiate itself from its competitors, though, if it has a lowly spec sheet and a $400 price tag. Sure a completely open phone is a great thing to have, but I’m not sure it’s high on the wish list of many people looking to buy a phone!

The final prediction is that the gPhone will be announced between 27th September and 5th October 2007. However, given that it’s now October 3rd, I doubt that this particular rumour is true, which does make me question the validity of all of Hopkins’s rumours.

Still, the rumours have been picked up by a number of authoritative sources, so it’s worth repeating them, albeit with the huge caveat that they are just that…rumours!