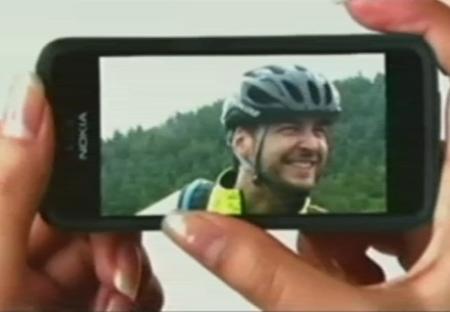 Apple’s iPhone really set the cat among the pigeons with its fantastic interface, causing virtually every other mobile phone manufacturer to release a new phone with touchscreen in effort to seem like thei’r phones aren’t out-dated. However, none of these touchscreens have been as innovative as the iPhone’s – until now.

What you see here is a new Nokia phone coming our way in 2008 that will feature a virtually identical user interface ot the Apple iPhone. Yes, it features a touchscreen, but check out the video after the jump, and you’ll think you’re looking at an iPhone with Nokia branding.

Nokia originally showed off their vision for a mobile phone user interface last year, way before the iPhone launched. However, all it seemed at the time was simply a great concept, with no news of any products based on the design.

The iPhone has obviously forceed Nokia’s hand, though, and they’ve released this video of a working prototype of their iPhone killer at their recent GoPlay event in London.

When this phone launches, it could really cause problems for Apple. The iPhone is not particularly feature-rich, as has been commented on many times, and so its only strong selling point is its glorious user interface, which, it has to be said, really is light years ahead of the competition.

However, Apple shot themselves in the foot somewhat by releasing the iPod Touch, which is, essentially, an iPhone without the phone, complete with exactly the same user interface. In other words, if you want the look and functionality of the iPhone, but don’t much care for the restrictive contract that goes with it, simply buy an iPod Touch instead and keep your existing phone, thereby giving you the best of both worlds.

Now Nokia has made life even more difficult for the iPhone – simply buy the new Nokia phone coming in 2008 with a user interface that’s nearly identical, and you have the best of both worlds in one device: an iPhone-like device with glorious user interface attached to a mobile phone with a fully packed feature set.

No news yet on release dates, but expect more news to be released very soon.