Garmin have announced that they’re working on an Android-based GPS smartphone for 2010.

Garmin entered the mobile phone market a while back with its much-delayed Nuvifone. Unfortunately, the delay meant that Garmin missed the boat somewhat with GPS phones, with first Nokia and then Google stealing a march on the company with a plethora of GPS-based phones that all worked rather well. 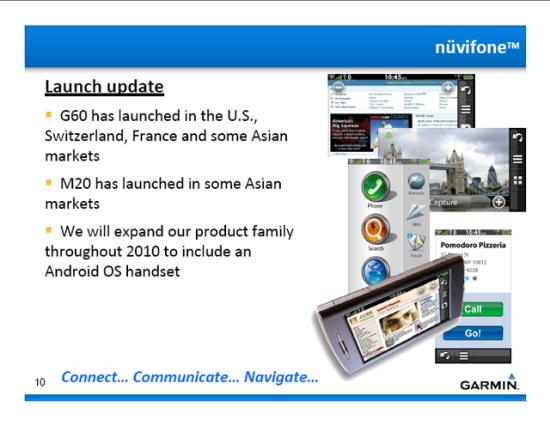 Of course, Garmin went the extra mile, adding its superior knowledge of navigation technology and turn-by-turn sat-nav experience to the mix, but the Nuvifone itself wasn’t as much a success as it could have been.

Android to the rescue – again!

With an Android-based Nuvifone, though, Garmin may have found a platform that can enable their navigational nous to really shine through.

Android was designed from the ground up to encompass a range of sensors, and with its completely open architecture, any manufacturer is free to develop it in whatever way they wish.

For Garmin, this means complete turn-by-turn Sat-Nav functionality in a touchscreen phone that knows where it is in time, space, orientation (north, south, east or west), and altitude. That’s a powerful combination!

No details yet on the exact spec of the Android Nuvifone, but if the phone succeeds, Garmin can add its name, along with Motorola and Sony Ericsson, to an increasingly long list of phone manufacturer that Android has helped save from the brink.