Now this little beauty is a sight for sore eyes! It’s the Nokia X9 – or rather, some leaked pics of the Nokia X9, which hasn’t exactly been confirmed by Nokia, but which certainly looks like the real deal.

Nokia’s X-Series range of phones currently comprises the Nokia X3 and X6, and as the letter implies, is all about the Xperience (yeh, I know, it sucks, and is a little too close to Sony Ericsson’s Xperia range!)

What this means is that you get a phone that’s focused primarily on entertainment. You can therefore expect a strong set of multimedia features and social network features aplenty.

Fortunately, we’ve got hold of some X9 specs, and it looks like it certainly won’t disappoint.

More details and pictures of the Nokia X9 after the jump. 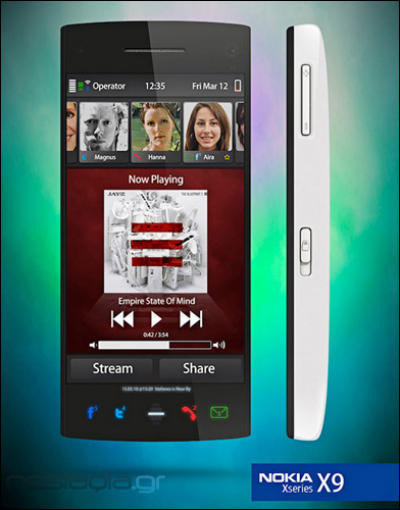 The Nokia X9 is set to be a candy-bar phone with capacitive touchscreen and some juicy hardware powering it in the form of the 1GHz Cortex-A8 CPU. This should make the X9 super-responsive, and powerful enough to cope with the demands of the features it offers. Features such as these: 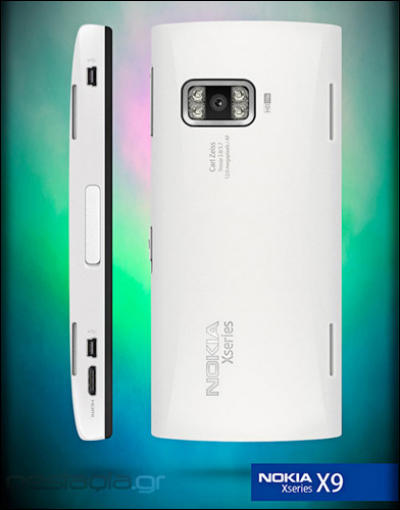 Here’s where things get a little murky. Nokia is meant to be releasing Symbian^3 very soon, with Symbian^4 coming later – much later! In fact, we’re not expecting to see a Symbian^4 phone until early 2011, yet here we have a phone that looks the real deal with what looks to be Symbian^4.

Of course, it could just be a revamped Symbian^3 interface, but whatever, it not only looks great, it also seems to have some seriously cool features.

Just look at the buttons on the bottom of the phone, for example (see pic below) – dedicated social media buttons that not only let you access your favourite social networks (principally Facebook and Twitter), they also show, in real time, how many status updates and tweets you’ve got that are unread.

This is a superb feature, and one that seems so blindingly obvious, it’s a wonder no-one else has thought of it! Maybe there’s an advantage to being late to market after all!

Also cool is the pic of the music player showing the Stream and Share buttons, which presumably let you stream your music from Nokia’s Comes With Music service, and then share your tunes with your mates. Not sure how you do this, but sharing should be a central part of any phone, and it’s great to see Nokia embracing the concept with open arms.

Thoughts on the Nokia X9

Although we still don’t know if the X9 is real or not, it makes perfect sense for the company, and there’s nothing in the phone’s specs that are too outlandish. The interface looks great and the tight integration of social networks makes the X9 seem like a genuinely exciting mobile phone.

And not before time! Nokia dropped the ball in 2009 and hasn’t recovered yet. It’s great to see the company coming up with some seriously desirable phones again, so let’s prey that the Nokia X9 is the real deal!